Three Toyota Mirai Fuel Cell Electric Vehicles (FCEVs) have gone on trial with a council in Melbourne, Australia, to help cut CO2 and provide real-world evaluation of the vehicles. 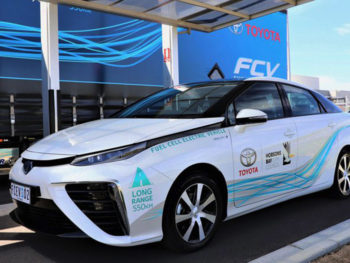 The cars, which are not currently on sale to the general public, are being provided by Toyota Australia to Hobson’s Bay City Council in Melbourne’s inner west for a 12-week trial.

The Mirais will be driven by council staff under a range of conditions and at different times of the day, and will be refuelled at a mobile hydrogen refueller based at Toyota’s former manufacturing site in nearby Altona – a 13-minute drive away.

“Council is committed to achieving its target of zero net emissions by 2020 in our operations,” she continued. “The significant emissions reductions we are generating by using the Mirais will helps us deliver on these strategic commitments, including our Corporate and Community Greenhouse Strategies and Integrated Transport Plan.”

Toyota Australia is also planning to loan the Mirai FCEVs to participating companies or organisations for up to 12 weeks at a time.

The trial has been welcomed by industry association Hydrogen Mobility Australia, which was co-founded by Toyota Australia with Hyundai in 2017.

“Hydrogen mobility is being recognised by governments around the world to meet their environmental and economic goals. In Australia, we are working with governments at all levels to accelerate the introduction of hydrogen transport with positive progress to date, however public-private partnerships will be essential for the long-term success of this important sector,” she added.