Shift to EVs could bring rise in motorway speed limits

The UK speed limit could be raised to 80mph on motorways and dual carriageways following drivers’ switch to EVs – but road safety organisations are already concerned over the wisdom of such a move. 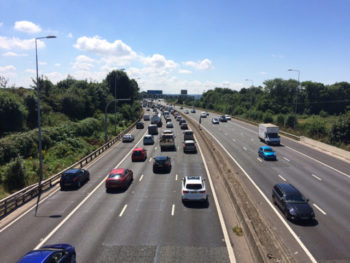 Speaking to the Daily Telegraph, Transport Secretary Shapps said that the switch to EVs could see the subject of a rise in speed limits – previously considered by the Government in 2011 – revisited as the previous issue with increased pollution would no longer have a bearing.

Speaking at a transport debate during the Conservative Party Conference in Manchester, Shapps added: “I think there is an argument for looking at our speed limits, both in terms of higher speed limits and actually lower limits – 20mph outside of schools.

“When it was last looked at in 2011, it was thought the carbon emission addition would be too great. But since I am a driver of an electric car myself I got to thinking about whether that would still be the case. I think there is an argument that once you have increased the level of electrification and therefore decreased or entirely removed carbon, that you might look at those things again.”

In response RAC head of policy Nicholas Lyes has said that the Transport Secretary raises a valid point in relation to the possibility that overall emissions could be lower if a move to an 80mph limit was accompanied by a large increase in the numbers of electric vehicles using these roads.

But he added: “However, any move to raise speed limits on motorways to 80mph is fundamentally an issue of safety. Part of the problem is that at present, there is a high proportion of drivers that break the 70mph limit, and drive nearer to 80mph. If the speed limit were to be changed to 80mph, there is a risk that the new default becomes even higher.

“Our motorways are currently the safest roads on the entire network, and we wouldn’t want to see anything happen that changes this. So unless there is compelling evidence that a change in the limit on some stretches of road would not adversely affect safety, the current limit should be retained.”

Meanwhile Neil Greig, IAM RoadSmart director of policy and research, expressed some concerns over a blanket approach to any changes, saying: “Modern cars have never been safer and IAM RoadSmart would welcome a trial of 80mph limits on our best smart motorways as these high-quality routes are specifically designed for high speeds. 80mph is already the average speed on free flowing motorways but we would be worried that any new unenforced limit could create tomorrow’s unofficial 90 mph limit.”

However, he added: “Not all UK motorways are built to the highest standards and many have sections with limited sight lines, tight curves, only two lanes and slip road designs that may not be able to deal with a higher limit safely which is why we believe only the most modern sections could safely cope with an increase. Closely monitored smart motorways, which set the speed limit according to traffic flows and density offer the ability to increase limits and enforce them. If the speed limit can be lowered below 70 mph in congested conditions, it could just as easily be increased to 80 mph when traffic flows are much lighter and conditions are good.

“In Holland the limit was increased to 80mph (120kph) several years ago after a comprehensive review of motorway capacity, congestion and safety. The limit was only increased on those sections where the road could cope with it. The vast majority of the busy Dutch motorway network remained unchanged or had variable limits applied to recognise varying traffic conditions throughout the day.  British motorways are the most congested in Europe so few drivers actually achieve 70 mph consistently on every journey. Any change in the limit is therefore unlikely to affect most drivers on their daily commute.

“This debate has gone on for far too long so the DfT should make it absolutely clear if it has real plans to increase the limit or not.  Once that decision has been made technical work should begin on the feasibility of raising the limit to 80mph on existing and future smart motorways. In any case trunk road agencies across the UK should carry out comprehensive reviews of their motorway network to identify those sections that could safely accept a higher limit and those that could not.”

Meanwhile Brake has also expressed concerns. A spokesperson for the organisation sasid: “Given that speed is a critical factor in the severity of collisions, any move to increase the limit is a step in the wrong direction. Stopping distances at 80mph are over 120m – the equivalent of 30 car lengths and 6 car lengths more than at 70mph. Strict enforcement of the current speed limit and investment in on our high-speed road network with safety as the priority should be the focus, not an increase in speed.”

Previous: Find out how EVs and salary sacrifice could work for your fleet at free webinars
Next: Reservations open for Peugeot plug-in hybrids