Peugeot’s new 3008, 508 and 508 SW plug-in hybrids are now available to reserve as the carmaker expands its line-up of electric and PHEV models. 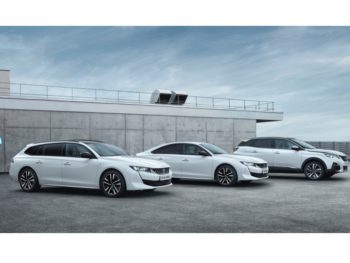 Part of Peugeot’s plans to offer an electrified variant across its entire model line-up by 2023, the new models start deliveries from January 2020 and sit in the 10% BiK bracket from April next year.

The 508 Hybrid and 508 SW Hybrid PHEV will offer drivers combined fuel efficiency of up to 235mpg and CO2 emissions from 31g/km under the latest WLTP tests, alongside an official 39-mile all-electric range. Along with the 3008 SUV Hybrid, the models feature a 180hp 1.6-litre PureTech petrol engine that works alongside a 110hp electric motor on the front axle, giving a combined power figure of 225hp.

Meanwhile, the new four-wheel drive 3008 SUV GT Hybrid4 comes with a 300hp plug-in drivetrain combining a 200hp version of the 1.6-litre PureTech engine and two electric motors, one on each axle. It offers up to 40 miles of fully electric range along with 28g/km emissions and a 0-62mph time of 5.9 seconds.

All four models can be fully charged in under two hours using a standard 7kW wallbox. Bespoke Peugeot services include e-Remote Control – a feature within the MyPeugeot app that enables users to remotely control functions such as programming a charging session (when plugged in).