Škoda has revealed further details of its new Enyaq iV electric SUV, which will bring up to a 500km (311-mile) official range and fast charging when it launches 2021. 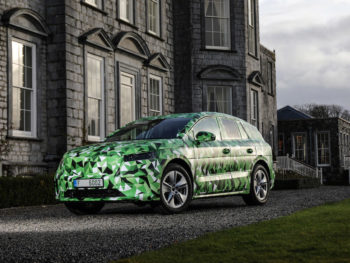 The brand’s second all-electric car after the CITIGOe iV, the Enyaq will major on practicality as well as long ranges and short charging times.

It’s the first Škoda production model to be built on the MEB electric car platform, also being used for the forthcoming Volkswagen ID.3 and SEAT El Born electric hatchbacks, and will be offered with a choice of three battery sizes, five power variants and a fast-charging option, plus rear- or four-wheel drive, enabling it to target everything from family requirements to drivers seeking longer ranges and higher power, including a range-topping vRS version.

The entry-level Enyaq iV 50 model features a 146hp rear-mounted electric motor, with a 55kWh lithium-ion battery, offering a maximum WLTP range of up to 340km (211 miles), according to provisional data.

At the top end of the line-up are the 80X and the vRS variants, which use the same 82kWh battery but are also equipped with a motor on the front axle, giving all-wheel drive along with outputs of 261hp and 302hp respectively. Both offer a range up to 460km (286 miles) and the range-topping vRS also delivers a 0-100km/h time of 6.2 seconds and a top speed of 180km/h (111 miles).

Three different types of charging will be available: as well as conventional 230-volt household plug sockets with an AC output of 2.3 kW, the Enyaq can be charged by wall boxes delivering up to 11kW, with charging taking six to eight hours depending on the size of the battery.

Finally, DC fast-charging stations with a charging output of 125kW will give a recharge from 10% to 80 per cent in some 40 minutes.

Alongside range and performance, the Enyaq iV will bring key features including onboard space and a 585-litre boot plus latest connectivity and infotainment solutions and Škoda’s usual Simply Clever features to target family and lifestyle needs.

Onboard equipment will include a free-standing, 13-inch central display, the availability of a head-up display with augmented reality and a permanent internet connection.

In line with its sustainability focus, it will also introduce new sustainable materials such as olive leather, making a first for a production Škoda.

Prices and full specification details will be revealed before the Enyaq arrives early 2021.