Sky has ordered 151 Ford Transit Custom plug-in hybrids for its commercial fleet, accelerating its plans to go zero emission by 2030. 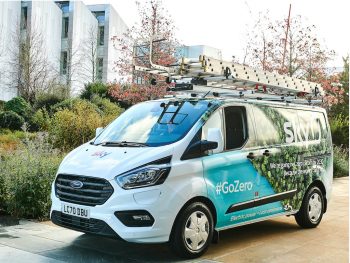 The vehicles will be used by its low-mileage engineers, delivering a 60% CO2 saving thanks to a 90g/km reduction compared to the previous vans. They arrive on the fleet just four months after the vehicle’s UK introduction and on the back of a 12-month trial in London by fleets including Sky.

The trial gathered 16 terabytes of data from 150,000 miles travelled, 1,800 battery charges and saw over 70% of journeys in London completed in electric mode. As a result of the work, a geofencing feature specified on all vehicles by Sky was made available, including for retro-fitting, automatically switching the vans to emission-free electric mode in controlled zones such as Clean Air Zones – bringing air quality benefits.

“They had one of the 20 prototypes Ford loaned to 17 London fleets in total, to understand real-world usage by collecting data on the test vans’ performance. I’m delighted that this early access impressed Sky enough for Ford to win this important and valued order.”

The vans will carry the Sky Zero branding to encourage others to #GoZero; alongside its transition to EVs, Sky has also committed to making all its tech products more energy efficient, developing the world’s most sustainable film and TV studios and make every Sky original production, TV channel and film net zero carbon by 2030.

“The great strength of our business is its ability to adapt to change, and responding to the growing climate emergency is no exception. We want to work with suppliers and the government to speed up the transition to net zero fleets and ensure we have a strong charging infrastructure across the country.”