SsangYong has revealed a Qashqai-sized concept SUV, said to not only give a hint of the next Korando’s styling, but of a fully electric SUV offering a 280-mile range, due by 2020. 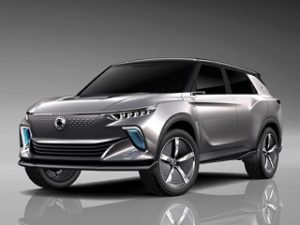 The e-SIV is said to preview some of the next Korando’s styling.

The e-SIV is a technological showcase of what’s likely to be coming soon to other models; including on-board internet access, voice control that learns as you use it, and driver assistance which can follow lane markings and other traffic.

Slightly larger than the current Korando, which accounted for 40% of the brand’s  UK order take for March, it features a 188bhp electric motor supplied by a 61.5kWh battery pack. That’s 50% more capacity than the latest Nissan Leaf, and similar to Hyundai’s forthcoming Kona Electric. This offers a range of between 200 and 280 miles, according to SsangYong.

Charging time is quoted as being 50 minutes to reach 80% capacity, implying that it has a 100kW on-board charger. A high-speed data connection means it can combine information about the remaining range, with nearby charging point availability, to plot the quickest route including top-ups.

An electric C-SUV suits booming demand for the segment across Europe. Analysis by JATO showed 4.56m were registered across the region last year – a 19.5% uplift on 2016, and taking 29% of the market – while the C-SUV segment in which it sits grew 21% year on year. Electric and hybrid vehicles, meanwhile, grew 46.1% during the same period, to 737,400 units.