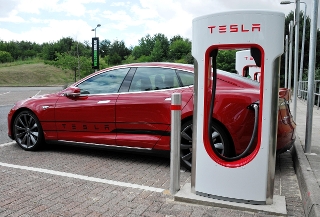 Two bays are now live at South Mimms, near the M1/M25 junction north of London, with a further six bays per site at Oxford Services on the M40 and Hopwood Park, near the M5/M42 junction south of Birmingham. The units replenish 50% of the Model S’s 310-mile range in around 20 minutes.

Welcome Break says it expects to add further Supercharger units at other sites around the UK, with another four locations due to be announced shortly. The company already has Electric Highway rapid charging points at most of its network, with South Mimms, Oxford Services and Hopwood Park among the first locations to have them.

Rod Mckie, CEO of Welcome Break said: “Welcome Break is proud to be at the forefront of the UK motorway electric vehicle network, promoting nationwide the message that electric vehicles are no longer just for inner city driving, but can now be used to cover the length and breadth of the country, as well as connecting with Tesla’s large presence across Europe. The new stations at Welcome Break sites will open vast parts of UK’s motorway travel routes. ”