Toyota plant to produce electricity and hydrogen from renewables

By Jonathan Musk / 4 years ago / Tech / No Comments

Toyota is to build a power plant capable of producing water, electricity and hydrogen using bio-waste as a fuel. 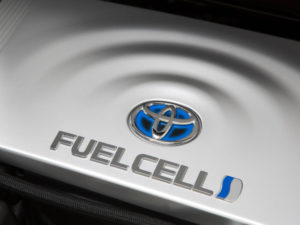 Toyota says it is still pursuing a hydrogen society

Set to be located at the Port of Long Beach, the carmaker’s North American operation said this will generate 2.35MW of power, which is enough to supply 2,350 homes, while producing enough hydrogen for the daily needs of 1,500 fuel cell vehicles when it goes online in 2020.

Despite the scale of its output, the Tri-Gen facility is said to exceed California’s strict air quality standards. Renewable power produced by the facility will supply Toyota Logistics Services’ (TLS) operations at the Port, making it the first Toyota facility in North America to use 100% renewable power.

Doug Murtha, group vice president of strategic planning said, “Tri-Gen is a major step forward for sustainable mobility and a key accomplishment of our 2050 Environmental Challenge to achieve net zero CO2 emissions from our operations.”

Toyota says the Tri-Gen facility is designed to aid a societal change toward hydrogen and will serve as a proof of concept for locally produced hydrogen generation at scale. The company says the facility will supply all Toyota fuel cell vehicles moving through the Port, including the Mirai and Toyota’s Project Portal – a heavy duty hydrogen fuel cell class 8 truck.

To support these refuelling operations, Toyota has also built one of the largest hydrogen fuelling stations in the world on-site with the help of Air Liquide.

Despite progressing towards electric mobility with announcements including the development of solid state battery technology for battery electric vehicles, Toyota has also stated they remain “committed to supporting the development of a consumer-facing hydrogen infrastructure to realise the potential of fuel cell vehicles”.