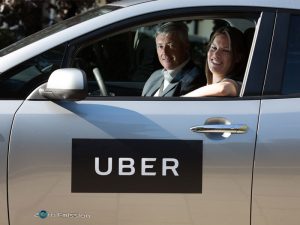 The ride-sharing app is to deploy a further 100 Nissan LEAFs to join the existing 50 models that went on trial in the autumn. The vehicles will be delivered to Uber rental partners next week and will be available to rent at a rate said to be competitive with most popular hybrid cars.

To support the expansion, Uber is also planning to install a network of branded rapid chargers dedicated for use by Uber drivers. It will also revise its app to enable Uber drivers using electric cars to access trips near a rapid charging point if needed.

The announcement of the initiatives comes as Uber publishes the findings of a study by the Energy Saving Trust on the trial of the first 50 Nissan LEAFs. The research shows that in just three months more than 35,000 riders took trips in a fully electric car in London through the Uber app. The survey also found that in the main, electric vehicles are popular with both drivers and passengers.

However, the analysis also identified a “severe lack” of rapid chargers in central London – there are only three publicly available – which hampered drivers.

The study also that drivers need residential charging infrastructure to be able to re-charge overnight at or near home. Even with chargers closer to their homes, many drivers reported a lack of reliable availability with some even having to get up in the middle of the night to use the charger when it was unoccupied. As a result, many drivers found the money saved from running their car on electricity didn’t make up for the amount of time lost struggling to find a suitable charging point.

Jo Bertram, regional general manager of Uber in the UK, said: “Our vision is for mass adoption of fully electric cars as private hire vehicles but there are some really big challenges we need to overcome. Charging cars can be costly for drivers and there’s a serious lack of rapid charging points in central London. We hope the Mayor’s forthcoming transport strategy will lead to more chargers which private hire drivers can use. In the meantime we’re determined to make progress with a further 100 Nissan LEAFs and plans for a network of chargers for drivers who use Uber.

“The more we can help Londoners share their journeys, leave their own cars at home and go electric the better for the whole city.”