The first four sites have been secured by eVcentres, who plan to develop solar-powered, fully off-grid electric vehicle charging centres in the UK with up to 20 rapid charge points. 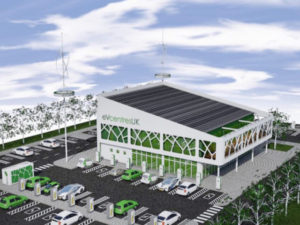 The centres will be equipped with 100% renewable energy generation using solar and wind power, to power up to 20 rapid chargers at each site, the company said.

Exact locations remain unannounced, but the company has confirmed the sites are along some of the UK’s major trunk routes, with three in England and one in Scotland.

The sites are currently awaiting planning permission, which the company expects to complete early in 2018 for development to commence in the summer.

eVcentres are planned to accommodate fleet and private drivers alike of cars, vans and lorries, as well as taxis public transport buses and coaches.

Richard Gordon, eVcentres CEO, said: “Sceptics have always said the national grid will be the limiting factor in the uptake of electric vehicles, but utilising renewable energy such as solar and wind, combined with battery storage, will allow our centres to be uniquely off-grid but still able to rapid charge up to 20 vehicles at a time using 100% renewable energy from new solar farms, specifically developed for our centres. It’s a real game-changer.”

Previous: IT firm to swap to all-electric fleet
Next: Free Alfen guide to smart chargers