Ultra-low emission vehicles… Time to get on board?

In an uncertain economic climate, Professor Colin Tourick reckons now might be the right time to take another look at ULEVs. 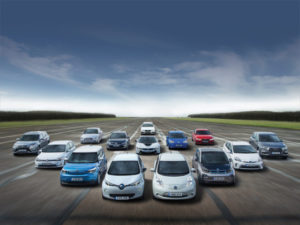 One thing that we can be sure of, however, is that this government and all future governments will remain keen to encourage people to drive ultra-low emission vehicles (ULEVs)

According to the Society of Motor Manufacturers and Traders (SMMT), new car registrations in March were 15.7% lower than March 2017. Whilst March 2017 was actually a boom month, coming just before the new Vehicle Excise Duty (VED) rates came into force, the SMMT says that “Economic and political uncertainty and confusion over air quality plans continued to affect confidence, resulting in declines across all sales types. Demand from business, fleet and private buyers all fell in March, down 14.3%, 15.0% and 16.5% respectively.”

Plug-in and hybrid vehicle registrations bucked this trend and were up by 5.7% for the month. Plug-in hybrids did particularly well, up 18.2%.

The Government needs to get its deal through Parliament but only has 316 seats of the 650 seats. The DUP has another 10, but they won’t vote for a deal that creates border controls in Ireland. It is hard to understand how there can be no border without the UK remaining in the customs union at the very least.

Then there is the fact that the EU doesn’t want to give us as good a deal outside the club, once we’re no longer full members.

It is difficult to see how these circles can be squared.

There will be many issues that need to be dealt with, either very soon or once we have left the EU. One crossed my desk this week. A client wants to introduce a share option scheme to reward key members of the management, using the HMRC-approved Enterprise Management Scheme. They then discovered that this scheme is EU State Aid approved, the current approval expired this month and the European Commission has not yet approved an extension. If my client sets up the scheme it may not deliver the planned tax advantages to the employees.

How many other such loose ends will we discover as we move into the transition period and then fly solo? Rant over.

One thing that we can be sure of, however, is that this government and all future governments will remain keen to encourage people to drive ultra-low emission vehicles (ULEVs) and indeed the current tax regime strongly supports the take-up of ULEVs.

If you have been thinking about putting ULEVs onto your fleet but have held off because you think they are expensive to buy, have a look at the table below and you’ll see just how cost-effective they can be. 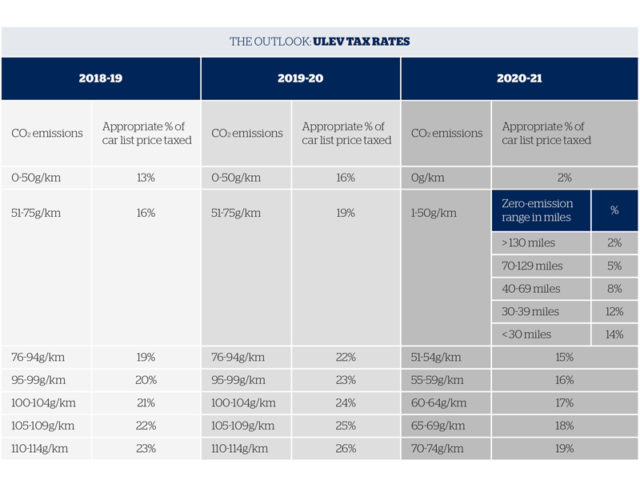 Just as a reminder, ULEVs emit less than 75g of carbon dioxide (CO2) per km. There are many ULEVs available, from inexpensive compact cars up to luxurious models. Almost all are powered in part or in whole by an electric motor.

1: 100% first year capital allowances are available to businesses that buy ULEVs, zero-emission goods vehicles or ULEV recharging or refuelling infrastructure. This is a huge benefit, allowing you to write off the cost of these assets against tax in the year of purchase.

2: The company car tax regime strongly favours ULEVs. There are currently two company car tax benefit-in-kind ‘appropriate percentage’ bands for ULEVs (0-50g/km and 51-75g/km). From 2020-21 these will be adjusted to reflect the number of miles the car can drive in zero-emission mode.

So a company car driver driving a ULEV today pays little benefit-in-kind tax. They will see their BiK tax bill rise over the next couple of years and then probably fall, particularly if they are driving a zero-emission car or a sub-50g/km car that can cover a significant range on battery power only. We should find out the percentages for 2021-22 in November’s Budget.

3: If you run a salary sacrifice scheme, you and your employees can still enjoy the same tax and national insurance treatment on ULEVs as you were able to obtain before the new optional remuneration rules were introduced in 2017. Nothing has changed.

4: At present the van benefit charge for zero-emission vans is low, only 40% of the main van benefit rate. However, this percentage is increasing and will be the same as the main rate from April 2022.

Whilst we don’t know what the chancellor will come up with in November, this really could be a great time to encourage your drivers into ULEVs. The tax advantages are there, and even though some of these vehicles cost more to buy than conventional vehicles, in full electric mode they are very cheap to run.

Here are a couple of other things you might wish to bear in mind:

Whatever happens to the economy post-Brexit, ULEVs will still be a cost-effective option for many drivers. Time to get on board?