United Utilities has announced plans to switch its entire fleet of vehicles from diesel to home-produced energy within the next 10 years. 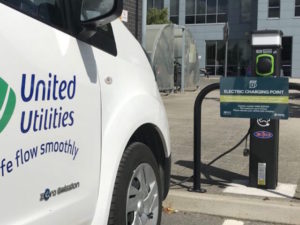 The water company runs a mixed fleet of vans, HGVs, 4x4s and plant equipment, mainly powered by petrol and diesel, but has already started shifting its vehicles to greener technologies; in the last three years it’s purchased four electric vans, 11 site-based electric vehicles, two full electric cars and two hybrid cars, backed up by an initial deployment of nine EV charging points across its sites, which will be expanded.

United Utilities chief operating officer Steve Fraser said the company aims to power its vehicles within a decade by energy produced by the company.

Head of fleet Adam Dooley added: “We’re working closely with a number of external suppliers to make sure that we are at the forefront of new developments in the industry. We’re really excited about our innovative electric wagon project which will be an industry first. We are also investing in our apprentice mechanics – this year they will be some of the first in the country to train on EVs.”