A 12-month trial of Ford vans has shown how plug-in hybrids could achieve around 75% of urban mileage on full electric power, bringing air quality benefits. 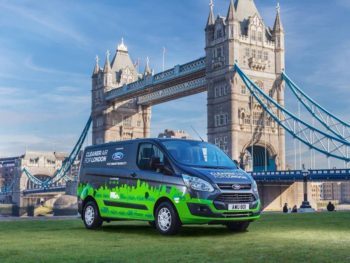 Carried out among a number of major fleets including Heathrow Airport, Sky, Speedy Hire, Transport for London and Vodafone, the trial of 20 Ford Transit plug-in hybrid vans – which go on sale at the end of 2019 – saw the hybrid van fleet cover more than 240,000 km (150,000 miles) real-world driving in London.

The trial found that 75% of Central London mileage was driven on electric power alone while 49% in Greater London was completed using pure electric power.

The results highlight that even without a fully established electric vehicle charging network, the hybrid vans were able to dramatically reduce tailpipe emissions in the inner city, thanks to the use of an electric motor which targets a zero-emission driving range of 50km (31 miles). The Transit Custom PHEV also offers the flexibility of a 1.0-litre EcoBoost petrol engine as a range extender for total range exceeding 500km (310 miles), thus eliminating range anxiety.

The trial – which was supported by £4.7m grant from the UK Government-funded Advanced Propulsion Centre – will be followed by further city trials by Ford in Cologne, Germany and Valencia, Spain with plug-in hybrid vans and people-movers while the brand is also launching an all-electric Transit in 2021.

“Emissions-free mobility is essential for the future of our cities and their citizens, but we know there are still barriers we face in the move to electrification,” said Mark Harvey, director, Urban Electrified Van programme at Ford (see interview here). “We also know that businesses still have legitimate concerns about the range of fully-electric vehicles, as well as their cost-effectiveness and reliability. These trials have helped Ford and its customers to investigate the extent to which PHEVs can help to achieve urban air quality goals, whilst not compromising on productivity.”

The trial of the prototype vehicles has also been used to guide enhancements to the production Transit Custom PHEV model, including increased motor performance, optimised operating strategies, and revised displays to educate drivers in achieving maximum electric regeneration.

“This trial is the first time Ford has given such early prototype vehicles to customers, and we’ve been able to incorporate their feedback directly into the production van,” Harvey added. “The response has been overwhelmingly positive – operators don’t want to give them back.”