Vauxhall is to introduce an electric version of its Combo Life MPV, aimed at both families and fleets. 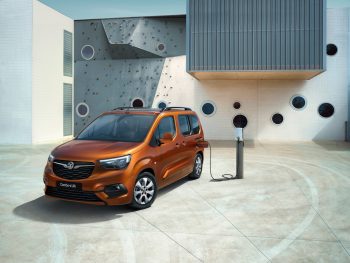 Arriving in the autumn, around the same time as the electric Combo-e van that it’s based on, the Combo e-Life will be available in two sizes: a Medium and a longer XL variant. Medium models will be available in five- and seven-seat configurations while XL vehicles will solely have seven seats.

In addition, the front passenger seat can be fully folded to extend the load length, while the second rows for both models are available with either three individually folding seats or with a 60/40 split (a 35/30/35 split is also available as an option). In both cases, each individual seat has its own Isofix child seat bracket. The Combo e-Life is also available with an electronically controlled panoramic roof.

As with the van, the new Combo-e Life is also rated to tow up to 750kg and comes with trailer stability technology that reduces vehicle speed when it detects the trailer swerving.

It’s powered by the same 136hp electric motor as the Combo-e van, capable of up to 260Nm of torque and enabling the Combo-e Life to accelerate from 0-60mph in 11.2 seconds.

The 50kWh lithium-ion battery is located under the floor between the front and rear axles, enabling the Combo-e Life to offer the same boot and interior space as standard petrol and diesel variants.

The battery can be fully charged via a three-pin domestic plug, a wallbox charger or up to 100kW rapid charging via public charging stations. All Combo-e Life variants come standard with a single-phase 7.4kW onboard charger, with an optional three-phase 11kW charger also available. A full charge via 100kW rapid charging can be completed in 30 minutes.