Volkswagen has offered a first glimpse of a future mobile quick charging station that can be independently setup from the power supply. 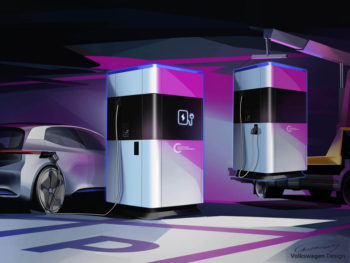 The idea is to expand the flexibility of otherwise rigid charging networks, for example, in public city parking, on company premises, or as a temporary charging point at large-scale events.

The technology is similar to a mobile phone portable power bank, but on a much larger scale. With a charging battery capacity of up to 360kWh, it provides the equivalent energy of more than ten current-generation Volkswagen e-Golfs despite being disconnected from the grid. Thanks to quick charging technology, the charging process only takes 17 minutes on average too, says Volkswagen.

The mobile units can be swapped with fully charged charge points too, or if plugged into the grid the units will slowly charge up while not in use. The company adds that this allows the device to be used as battery grid storage, for example taking advantage of renewable sources of power.

The first mobile quick charging stations will be set up as early as the first half of 2019 in Volkswagen’s hometown as part of a pilot project, and will support the expansion of a charging infrastructure in the urban area. As of 2020, the charging station will also be implemented in other cities and communities.

Thomas Schmall, chairman of the board of management of Volkswagen Group Components, said: “They can be set up anywhere as required – with or without connection to the power supply. This flexibility enables a completely new approach for the rapid expansion of the charging infrastructure. Cities can, for example, find out the most suitable places for a permanent charging point before making major investments in developing the network. In addition, it will be possible to set up a large number of charging stations temporarily – exactly when and where they are needed.”