The current rate of uptake for EVs will only be possible if smart workplace charge points are used, say Vinci Energies’ subsidiary Actemium. 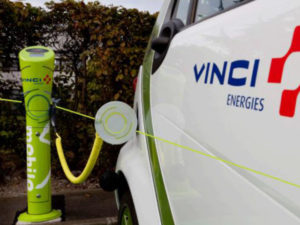 Smart workplace chargers are needed in order for EV uptake to be effective, say Actemium

A total of between 10-15 million EVs could be on Britain’s roads by 2035 according to the latest forecasts, which Actemium predicts will require between 1.1-1.65 million charge points, of which 330,000-495,000 would be workplace chargers.

However, this will only be possible using smart and connected workplace chargers to balance load and manage the energy they use in order to operate on the grid, without causing problems further down the line.

Speaking on behalf of Actemium, Kevin Pugh, business d-EVelopment, said: “Our biggest concern is if charge points are all bought on a price-driven sale and networks of chargers aren’t smart or working together.”

‘Dumb’ chargers that don’t communicate or balance load together that are bought on price alone are being blamed for causing problems with electricity supply at businesses, rather than truly understanding a fleet’s daily vehicle needs. Instead, Actemium says it is able to install more intelligent workplace chargers that won’t necessarily require additional and costly higher-powered grid connections.

The company also warned that in order to achieve the forecast EV sales figures and workplace charge point installations, awareness and education in the market must grow, as well as the manner in which EVs are sold e.g. better training for dealership sales staff so customers are better able to understand the product they’re buying and end up in the right electric vehicle for their needs.

Further problems ranging from current supply difficulties of models including the Volkswagen Golf GTE and BMW 330e, to a complex system of RFID cards and proprietary apps were also blamed for hindering electric vehicle adoption. A roaming model already being used across Europe, whereby charge points from varying networks can be paid for in one single end-of-month invoice, was suggested as being an ideal model to adopt in the UK in order to support electric vehicle adoption and make it more attractive for businesses.

The company also said fundamental changes in attitude towards electric vehicles were necessary, moving away from the current mindset of refuelling once a week and covering 300+ miles in-between, to working out how many miles are covered per day and recharging a vehicle each night.