All new rapid chargers to support contactless payments by 2020

The Government has called for all new rapid and higher-powered chargepoints to offer contactless card payments by spring 2020 as it also opens a consultation on fitting all new-build homes with an electric car chargepoint. 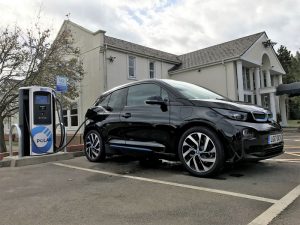 Under today’s announcement, the Department for Transport has said it expects industry to develop a roaming solution across the charging network, allowing electric vehicle drivers to use any public chargepoint through a single contactless payment method without needing multiple smartphone apps or membership cards. And it added that it’s prepared to intervene to ensure by using powers in the Automated and Electric Vehicles Act if developments don’t go ahead.

Although there are now more than 20,000 publicly accessible chargepoints in the UK, including more than 2,000 rapid devices, Future of Mobility Minister Michael Ellis said the variety of payment methods at the moment was a source of frustration for drivers.

He added: “It is crucial there are easy payment methods available to improve electric vehicle drivers’ experiences and give drivers choice. This will help even more people enjoy the benefits electric vehicles bring and speed up our journey to a zero-emission future.”

This announcement comes as the UK’s largest public charging network – the Polar scheme operated by BP Chargemaster – commits to introducing card payment on all new 50kW and 150kW chargers from today. It will also retrofit its existing UK-made rapid chargers with the technology over the next 12 months.

David Newton, CEO at BP Chargemaster, said: “As the operator of the UK’s largest public charging network, including the greatest number of rapid chargers, we support the Government’s vision for all new rapid and ultra-fast chargers to support contactless bank card payment.

“We will be going one step further, not only by introducing this facility on all new 50kW and 150kW chargers from today, but also by committing to retrofit our existing UK-made rapid chargers with this technology over the next 12 months.”

The Government has also separately announced that all new-build homes could soon be fitted with an electric car chargepoint in a public consultation on changing building regulations in England.

The proposals aim to support and encourage the growing uptake of electric vehicles within the UK by ensuring that all new homes with a dedicated car parking space are built with an electric chargepoint.

And the Government has also announced that it is consulting on requirements that all new private chargepoints use ‘smart’ technology, keeping costs down for consumers while also minimising the impact on the grid.  The consultation proposes using powers under the Automated and Electric Vehicles Act to require most new chargepoints to have smart functionality and meet minimum standards. It also launches a call for evidence on the longer-term options for smart charging.

The announcements come a week after the Government said it’s investing £37m in new technologies that will transform electric vehicle charging – including wireless systems.

Edmund King, AA president, said the new announcements from the Department for Transport on introducing credit and debit card payments on rapid charge points from next spring and installing charge points on newly developed homes were “a step in the right direction”.

He added: “It is encouraging that we will have an over-arching review to give a clearer picture of what is needed on the electric highway ahead. We are pleased that our calls for rapid chargers to be accessed by all via debit and credit cards or contactless payment has been heeded.

“Three-quarters (75%) of drivers agree that new homes should cater for the EV revolution by having chargers installed during their construction. We have long argued this point and are happy steps will be taken to encourage drivers to switch to electric.”

Previous: Ford and Volkswagen tie up on EVs and AVs
Next: 0% BiK on EVs sends fleet interest sky-high