BP Chargemaster has unveiled its new 150kW charge point, which will begin to be rolled out across its Polar network and BP forecourts. 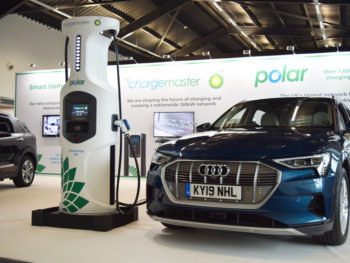 The chargepoint is the first 150kW-capable unit to be built in the UK, the company said, and is expected to deliver around 100 miles of range in 10 minutes to compatible vehicles.

Unlike some proprietary networks that only support charging of one connector type, the Ultracharge 150 features both CCS and CHAdeMO – used for popular cars including the Nissan Leaf, Kia e-Niro, Hyundai Ioniq & Kona Electric and BMW i3 to name but a few. However, the new charge points do not include AC charging for cars including the current Renault Zoe, although BP Chargemaster added that it will continue its rollout of 50kW chargepoints that include 43kW AC charging.

For payments, the units are accessible to both pay-as-you-go and subscription customers of the Polar network, BP Chargemaster added, but there is indication yet as to contactless payment compatibility or being able to pay for electricity used at an Ultracharger 150 in a forecourt shop.

David Martell, chief executive of BP Chargemaster, said: “We shifted consumer expectations for rapid charging with the introduction of our 50kW Ultracharge unit and we are confident that the Ultracharge 150 unit will do the same for 150kW ultra-fast charging.”

The ultra-fast chargers will be installed with investment from BP Chargemaster, which has the largest public charging network in the country, operating over 400 rapid chargers and a total of more than 7,000 charging points available for electric vehicle drivers nationwide.