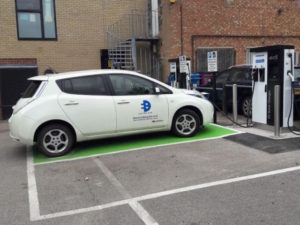 Cambridge was one of 10 councils in the UK to be awarded funding by OLEV under its competition for EV Taxi Infrastructure. The funding is being used the historic city for the supply and installation of 21 eVolt rapid and fast chargers over the next three years.

The first phase is underway, with two chargers already operational in the Adam and Eve Car Park. A further six rapid chargers will be installed across three other sites, due for completion by the beginning of September.

The three other initial sites include: car parks at Castle Hill and Arbury Court, and one on-street location in Newmarket Road.

eVolt will work alongside Electric Blue, who are providing the remainder of the funding for the project and will also provide operational support throughout.