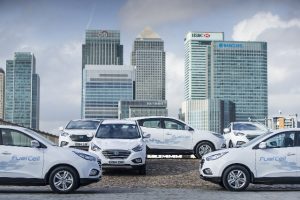 Following decades of research, hydrogen-fuelled cars are taking to the roads across the globe this year as major carmakers start small-scale volume production for the first time.

Toyota, Honda, Daimler, Hyundai and Kia are leading the way and others will follow closely behind as fuel cell electric vehicles (FCEVs) make their case as the future for the car industry.

Hydrogen has a lot going for it, cheap and easy to produce while its only emission is H2O – water you can actually drink straight from the tailpipe if so inclined.

The downside? Cost – fuel cell stacks are still expensive to produce – and the lack of infrastructure across the planet. Hydrogen fuel filling stations are few and far between. However, like conventional petrol or diesel, a full tank of hydrogen can carry you many hundreds of miles.

For the reasons mentioned above, the first few thousand FCEVs taking to the roads this year are targeted at fleet users, and in many cases, these are hydrogen fuel technology and infrastructure partners. Bus and commercial fleets will also become major targets as will company car users and rental fleets.

With zero emissions, hydrogen fuel for FECVs is high on the agenda in a number of countries with significant government projects enabling the rollout of hydrogen mobility programmes. It is the cleanest fuel available. It can be generated using surplus renewable energy supply and water using an electrolyser. It can even be made on-site at the point of use, eliminating the need for transported fuel deliveries.

The EU and individual governments are making funds available although in infrastructure terms – providing hydrogen filling stations – the plans are still not really joined up. The cars coming first, followed by somewhere to refuel, sounds the wrong way round and, largely, it is.

However, this is not so much a ‘chicken and egg’ situation, more like “an omelette which needs to be served properly,” said Robin Hayles, sustainable fuel development manager at Hyundai UK.

“The hydrogen car is only a tiny part of the story,” he added. “Hydrogen is a renewable energy that can be used in housing and business in the future. The key is the development of an infrastructure.”

Like many countries, the UK currently has just a handful of hydrogen fuel filling stations and two of these, at Honda’s factory in Swindon and the Millbrook Proving Ground in Bedfordshire, are not easily accessible to the public.

Current petrol and diesel filling stations could provide an instant network but the installation of hydrogen tanks, which have to be kept under pressure, is a very expensive business.

While the petro-chemical industry might also baulk at installing a competitive fuel at their outlets, it would be unfair to say it is standing in the way. The big oil companies are taking an active interest – contrary to popular belief, there are no huge profits in selling petrol or diesel off the forecourt.

However, supermarkets, which are increasingly becoming major fuel retailers across Europe, are not being slow to spot an opportunity. Major UK supermarket chain Sainsbury’s has invested in a new ‘SmartFuel’ station at its Hendon store in North London.

Sainsbury’s head of fuel, Richard Crampton, said: “We are always looking for solutions that reduce our impact on the environment. We currently have 280 filling stations serving customers throughout the UK and believe that exploring greener fuels today is fundamental to the long-term sustainability of our business.”

Air Products’ hydrogen energy business manager Diana Raine said: “Making hydrogen technology available at a supermarket for the first time is another big step in encouraging the use of cleaner, greener fuels to reduce air pollution.” It’s a move being closely observed by other supermarket chains across Europe.

Carmakers have been researching hydrogen fuel since the early 1990s and the vehicles taking to the road now are already in their fourth generation.

“There is still so much out of our control and we need a greater commitment from governments because the technology, although cost is coming down all the time, is still very expensive,” said Hyundai UK’s Robin Hayles.

The EU is making some €20bn (£14.4bn) available for investment in future fuel technologies while a number of initiatives are gathering pace. HyFive is a pioneering €41m (£29.5m) project involving leading motor manufacturers, hydrogen fuel suppliers, the Mayor of London’s office and energy consultancies to make hydrogen vehicles viable.

With clean transportation gaining traction in Europe, the EU’s TEN-T Programme is investing nearly €3.4 million (£2.4m) in studying the region’s current hydrogen fuel infrastructure to determine what can be done to expand the framework for fuel cell vehicles. The research project has already launched initiatives that aid in the development of hydrogen stations in Belgium, Finland, Poland, and several other countries.

The EU also suggests that hydrogen fuel could establish more energy security, making countries less reliant on imported fossil-fuels. As such it is urging member states to accelerate incentives to promote the adoption of fuel cell vehicles.

With billions of Euros, Dollars or Yen having been piled into the research and development, the car industry is determined to see hydrogen succeed. Most recently, Toyota has announced that it is making available thousands of hydrogen fuel cell patents royalty free.

The company said at January’s Consumer Electronics Show in Las Vegas that it hoped the initiative will spur development and introduction of innovative fuel cell technologies around the world.

This Toyota initiative builds on previous commitments, including substantial financial support for the development of a hydrogen fuelling infrastructure in California and the north eastern US. Toyota has made loans available to FirstElement Fuels to support the operations and maintenance of 19 hydrogen fuelling stations across California and has a collaboration with Air Liquide to develop and supply a phased network of 12 hydrogen stations for New York, New Jersey, Massachusetts, Connecticut and Rhode Island.

The great unknown is whether consumers will ultimately take to hydrogen cars. However, if the cost is right and the infrastructure is in place, FCEVs take fewer than five minutes to fill up, have the range of a conventional petrol or diesel car, make no noise as they power an electric motor and have zero emissions. What’s not to like?