Coventry City Council continues to fight Government calls for a charging Clean Air Zone as it says it remains keen to explore other options, as outlined at a fleet summit last week. 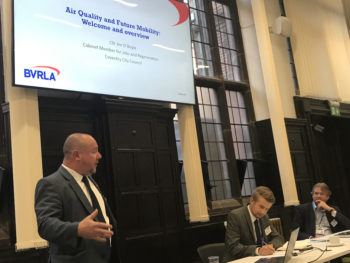 The local authority is one of 27 towns and cities in the UK where NO2 levels are forecast to exceed legal limits by 2020 and has been working with the Government’s Joint Air Quality Unit to agree an Action Plan to reduce NO2 levels within the city.

However, its plans to cut emissions through measures including the use of electric-powered taxis, retrofitting cleaner engines on 100 buses and introducing new walking and cycling routes, road closures and traffic restrictions, were rejected in June by DEFRA, which said the council needed to deploy a Class D charging Clean Air Zone – which includes cars too – as soon as possible.

At last week’s fleet summit – which was jointly hosted by the BVRLA, Energy Saving Trust and Coventry City Council and also attended by BVRLA members, fleet operators, local businesses and council representatives – the council reiterated its previous comments that it believes air quality issues can be resolved without the need for a charging Clean Air Zone (CAZ).

Coventry City Council Cabinet Member for Jobs and Regeneration, Cllr Jim O’Boyle said: “Our position is that a charging zone is not needed in Coventry. Roads in the city where there are air quality concerns can be resolved without charging. Coventry’s approach has been, and remains to achieve compliance through a combination of road improvements, traffic management, travel planning and promotion of electric vehicles and new technology.”

The local authority has been exploring electric vehicle infrastructure measures and potential support for car clubs in a bid to change transport behaviour.

Coventry has also been chosen as the region for the UK’s first Mobility Credits pilot. The controlled trial will involve credits that are loaded on to a travel card and smartphone app to spend on alternative travel including public transport, car sharing or green hire schemes.

The council’s work has been greeted by BVRLA public affairs manager, Rachael Hewish who said: “We’re very grateful to Coventry City Council for welcoming us to their city for this important discussion. The decisions made will affect thousands of people. Poor air quality impacts on people’s health and quality of life and the solutions proposed to tackle it will in turn affect thousands of businesses across the region and the wider economy.

“It is therefore reassuring to hear that the council are taking a pragmatic, tailored and solution-focused approach to their proposed plans. We look forward to engaging with them further as soon as these plans are confirmed later this year.”

As well as the Coventry event, last week also saw the BVRLA active at national level on Road to Zero activity. The association has taken part in meetings with JAQU to discuss a national CAZ portal and had meetings with HM Treasury and the Office for Low Emission Vehicles (OLEV) to reiterate the need for a supportive tax regime and incentives, alongside more investment in EV infrastructure to support the Road to Zero Strategy.