Cupra has set out ambitious plans for its further growth, underpinned by its forthcoming Born electric vehicle and a new distribution model. 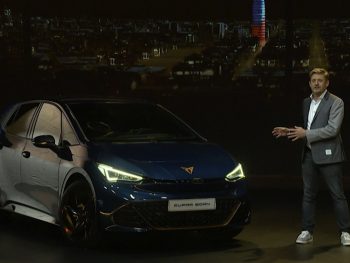 The Cupra Born, the brand’s first 100% electric model, will be the impulse for the transformation of the company’s sales model and will be offered under subscription

Speaking at a virtual event celebrating the brand’s third anniversary, president Wayne Griffiths said Cupra was looking to double the sales volume of 2020 and reach a mix of 10% of the SEAT Group’s total volume.

Griffiths added that the launch of the Cupra Born fully electric vehicle is set to be the impulse for the company’s transformation.

Originally planned to debut as SEAT’s first fully electric vehicle in the form of the el-Born, the EV has morphed into the hot hatch Born, which will go into production at the Zwickau plant in Germany starting in the second half of the year and will help drive Cupra’s strategy, including into new markets and via new channels.

Wayne Griffiths said: “The Cupra Born will be a game-changer in the electric market with its stimulating design and instantaneous performance. This vehicle will contribute to reducing global CO2 emissions and meeting European targets. With this car we intend to contribute to the electrification of Spain and the world through its emotional sportiness, and we want the next generation of young challengers to be part of this transformation. That’s why this vehicle will also be offered under subscription contracts, with a monthly fee that will include the use of the vehicle and other related services.”

Griffiths also said the Tavascan 306hp electric SUV concept revealed back in 2019 is still in the offing, while Cupra’s existing plug-in hybrid models will also support its rapid electrification plans – the Leon, Ateca and Formentor plug-in hybrids are already on sale and the brand says electrification will be the key to its growth in 2021, helping it to strengthen its presence in Europe and access the most electrified markets, such as Norway and the Netherlands, while also expanding its presence in international markets such as Mexico, Israel and Turkey.

Alongside electrification, Cupra has two further strategic pillars for 2021: implementing a new distribution strategy to strengthen its global presence, and to continue building the brand’s universe through new experiences.

Its plans to revamp the current status quo for distribution will include a new sales model alongside traditional dealers. This includes the opening of ‘City Garage Stores’ in central areas of major cities around the world. Cupra has already opened such stores in Mexico City, Hamburg and Barcelona, and plans to open a new City Garage Store in Munich in the second half of this year.

The plan is to expand Cupra’s global network to 800 outlets by the end of 2022 and it will also increase its team of sales advisors to 1,000 Cupra ‘Masters’.