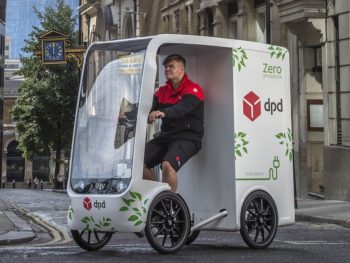 Five of the e-cargo bikes are currently being tested on the streets of London, York and Newbury, while the other five are being shipped to DPD business units in Ireland, Spain, Germany, Portugal and France

Developed in partnership with Oxford-based manufacturer EAV, the bio-mechanical hybrid electric-assisted pedal bikes can carry a 120kg payload while covering a range of up to 60 miles in a day, enabling over 100 parcel stops. They can be recharged using a normal 13amp, 240v plug socket.

Manufacturing also makes use of advanced composites for the body, which include the latest fully recyclable materials; as an example, the fascia is made from a composite strengthened with hemp fibres stuck together with a resin based on the oil from cashew nut shells.

Dwain McDonald, DPD’s CEO, commented: “The early trials show that the P1 is performing really well and clearly has potential to be more efficient for us than traditional vans in certain locations. It is highly manoeuvrable, can carry a good day’s worth of parcels and can often get closer to delivery addresses than the vans.”

The development of the e-cargo bikes forms part of DPD’s aim to be the most responsible city centre delivery company and the leader in electric vehicles in the UK. In October last year, DPD opened the UK’s first all-electric parcel depot in Westminster and plans to have a fleet of 500 electric vehicles by the end of 2020. Earlier this year, it deployed a smart charging network.

McDonald added: “We’re on a journey with EVs and as usual, we are ahead of the pack. But it is uncharted territory, and the reality is that we are going to need to invest in new and different types of vehicles to solve new and different challenges. We know that the environment and climate change matter more than ever to our clients and the feedback we get when we share our EV vision with them is really positive.”

For EAV, the partnership with DPD forms part of its work to help delivery firms meet growing urban challenges; it’s also working with Posten Norge to deploy e-cargo bikes on the streets of Oslo, Stockholm and Copenhagen.

Adam Barmby, founder and technical director at EAV, commented: “It has been fantastic to work alongside DPD and to see our vision for the P1 realised. It is classed as an e-cargo bike, but really, we started from scratch and reimagined an entirely new type of vehicle to operate within the parameters of today’s urban delivery market. It is a modular design, so we can extend or shorten the chassis and change the cargo configuration to fit the brief.  In addition to the design flexibility, there is also a whole new set of efficiencies that we are tapping into here. Realistically, the P1 can move as fast or faster than a traditional van through many cities because of the different routing it can take.”