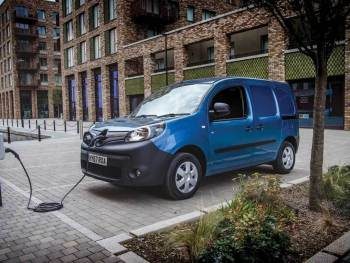 Renault could have sold more Kangoo Z.E. vans in 2018 had supply been available

Renault UK sold more than 350 Kangoo Z.E. electric vans last year, more than double the 2017 total, UK brand manager Steve Wilson told Van Fleet World. And that number could have been much higher, if the company had been able to get its hands on more vans, as more than 10,000 Kangoo Z.E. vans were sold in 2018 across Europe. Certainly, he is confident of a similar increase in sales this year, if the company can meet the expected demand.

“I would of thought we will at least double that, but unfortunately lead times are currently up to six months,” said Wilson.

The Renault factory in Mauberge that assembles all Kangoo models is already ramping up to produce 50% more Z.E. vans this year, though it would appear that it is battery supply that is proving the limiting factor.

“The customers know how good the vans are, our dealers know how to service them, we just need to get more of them,” said Wilson.

To date, around 60% of last year’s orders were for the longer Kangoo Maxi Z.E. which offers 1.0m3 of additional load volume, but 25kg less payload than the shorter model.  Both vans share the same driveline and battery, offering a realistic 124 miles of range.

While Kangoo Z.E. was originally offered with a choice of purchasing or leasing the batteries, all models are now sold complete, with a five-year/60,000-mile battery warranty to provide reassurance for buyers.  Renault also now provides a battery repair service, so that instead of replacing the whole battery pack, it can replace one or more of the 48 cells, to deliver full performance at a more affordable price.

With Kangoo Z.E. performing well, Renault also launched Master Z.E. at the end of last year and the first deliveries to customers are expected in April or May. Sales are expected to be relatively low for the first 12 months, with larger fleets and local councils among the early adopters. Renault has once again taken the lead in the sector, with many manufacturers showing electric vans of this size but few actually on sale yet, apart from the likes of Iveco, LDV and BD Auto.

“It gives the range that we say it does, 75-80 miles in the real world,” said Wilson. “In 20 years, electric will be the dominant power source.”

It is perhaps unusual to see a manufacturer pleased with a downturn in sales, but that has been the case with Renault, as it has restricted its sales to profitable, longer-term customer streams.

“Last year was a very good year for us, demand remained strong,” he said.

“Our volumes were around 16,000, down from just under 20,000, but that was where we had planned to be, with sustainable business. We’re not just pushing volume out, we’re looking for good, long-term and repeat business.”

The company has also been focussed on building its Pro+ dealer network, with 70 of its 155 dealers now achieving the business centre accolade, up from 35. Pro+ dealers sell cars as well as vans, but the focus is very much on business use and Pro+ dealers will have LCV experts and demonstrators on site to meet the needs of local businesses.

Some of the dealers are looking at mobile service vans, while Renault has launched a Lifetime Roadside Assistance offer, based on the vehicle rather than the owner, so long as the van is serviced by a Renault outlet. With facelifted Trafic and Master vans due by the middle of the year, and a growing range of electric vans on offer, the company seems set for another strong year.