The Energy Saving Trust (EST) has launched a new web-based tool that highlights the cost benefits of switching to an electric vehicle for used car buyers. 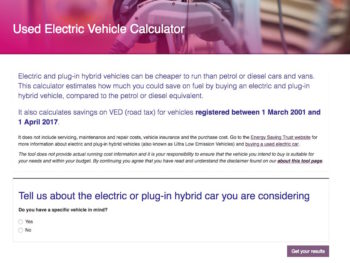 The ‘Used Electric Vehicle (EV) Calculator’ enables potential car buyers to compare their current car’s fuel and road tax costs with the second-hand electric car of their choice, with calculations based on the user’s current car and the number of miles they normally drive, as well as their use of traffic charging zones, such as London’s Congestion Charge zone.

According to the EST, drivers could save thousands of pounds in money by making the switch, and cites the example of a driver doing 7,500 miles a year – the national average mileage – who could save around £820 a year on fuel and tax by driving a Nissan LEAF, compared to a medium-sized petrol car (based on a petrol price of £1.17 per litre). It also calculates savings on Vehicle Excise Duty (VED) for vehicles registered between 1 March 2001 and 1 April 2017.

And the tool also outlines the CO2 savings from opting for an electric car.

“This web based tool signposts to further information as well as demonstrating the significant savings these cars can offer and, as this is still a new way of driving for many, having access to this information should inform and hopefully encourage more people than ever understand the real value of moving to an electric vehicle in the future.”