Europcar Mobility Group has ordered a further 85 Renault Zoe electric cars to add to its carsharing and Deliver & Collect fleets. 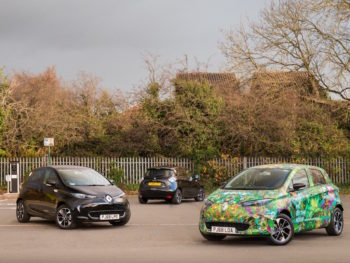 The firm’s E-Car Club carsharing division has taken a number of the 40kWh Renault Zoes as it looks to expand further in the UK. The majority of the new vehicles will be used for a brand-new scheme in North Solihull, which sees the electric car made available to members at nine locations throughout the region’s residential areas.

The rest of the Renault Zoes will be used by Europcar to support its Deliver & Collect service in major UK cities.

The new order comes on the back of Europcar’s addition of 55 Renault Zoes for its Deliver & Collect logistics fleet in 2016, which at the time marked the biggest-ever UK order for the Zoe.

Gary Smith, managing director, Europcar Mobility Group in the UK, said: “Since adding the Renault Zoe to our Deliver & Collect logistics fleet in 2016 we’ve found its usability has been a big plus for our operation. A vast array of our Deliver & Collect drivers use them, many of which have never experienced an electric vehicle before. The simplicity means that they can quickly familiarise themselves with the car. The instant response and fully automatic transmission also adds to a fuss-free driving experience in the often-congested urban areas in which our Zoes operate. But more importantly they are playing a pivotal role in helping us to lower our carbon footprint and reach our goal of 5% of our entire UK vehicle fleet being pure electric by 2020.”