By Alex Grant / 2 years ago / UK News / No Comments
Driver appeal for electric vehicles has become as important a reason for switching out of petrol and diesel models as financial and environmental savings, according to new research by Delta Energy and Environment. 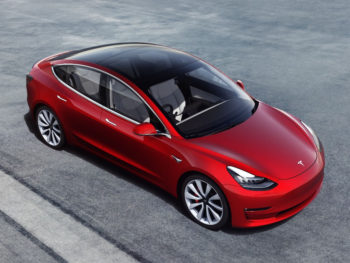 New electric vehicles, such as the Tesla Model 3, are fast driving the emotional appeal of EVs for drivers

The consultancy company surveyed 500 electric and plug-in hybrid drivers split evenly across Europe’s five largest markets – the UK, France, Netherlands, Germany and Norway – which collectively accounted for 80% of the 134,600 plug-ins sold in 2018. Its aim was to identify trends in home charging habits.

The results reflect rapidly changing attitudes to EVs, with emotional appeal the fastest-growing reason for purchase. Some 27% of respondents who had opted for an EV within the last 12 months said they had done so because it was more appealing than a petrol or diesel model. That’s a 50% increase compared those who had had one for longer than a year, within which 17% said it had been the main factor.

Among new owners, emotional appeal now ranks higher than financial benefits (24% of respondents) and is almost level with environmental considerations, which remains the most common reason for moving to a plug-in, at 28% of respondents. The data also shows drivers are advocates of the technology; new owners were twice as likely to have been recommended a plug-in vehicle (16%) than those who had been driving one for more than a year (8%).

Alexander Lewis-Jones, product manager & analyst within Delta-EE’s EVs & Electricity Research Service, said: “The latest cars are just more appealing than combustion engine vehicles. This is a trend that’s set to increase, especially with the [Tesla] Model 3 coming in March; we think this will change the reasons why people are going into an EV.”

Across the five markets, 55% of charging sessions were said to take place at home, which is three times higher than at work (17%). A third (31%) of respondents said they charge from a domestic socket, while 61% use a dedicated charging point.

British drivers were found to be more likely to have a proper charging point than in other countries, helped by the UK’s Electric Vehicle Homecharge Scheme, but are using slower-than-average points due to the low uptake of three-phase home energy supplies – particularly compared to Germany.

Lewis-Jones added that the company sees significant change ahead within the charging point market, as an ‘Apple’ emerges out of the multitude who are currently competing. “Chargepoints are an early market, and one destined to grow exponentially,” he said. “And everyone is realising that, whether you are a startup, an electricals OEM or perhaps another in the ecosystem – such as [Spanish utility company] Iberdrola investing in Wallbox this week, for example.

“The market is obviously going to big, but can it sustain the combined output ambitions of all of them individually? I don’t think so. And many are realising the struggles with turning a profit on AC solutions.”