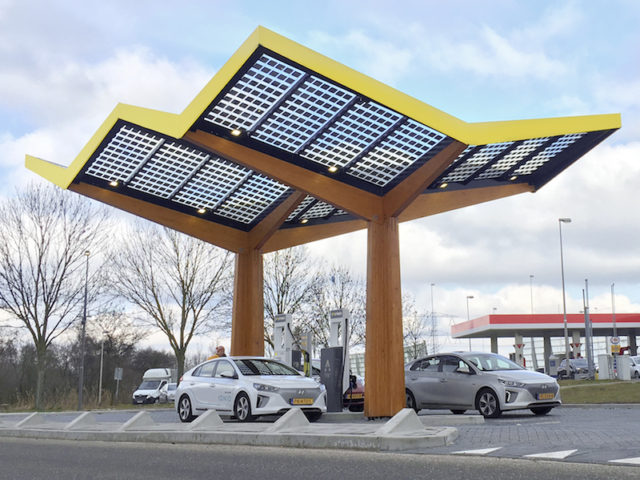 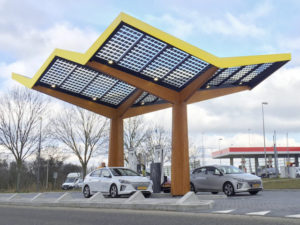 Fastned’s first 350kW station is located on the A8 highway near Amsterdam.

Developed by technology group ABB, the stations bring seven times higher output than today’s rapid chargers – and 100 times faster than home chargers – enabling them to meet the demands of forthcoming EVs. They also feature a modular design, enabling them to be easily extended, and are said to be the world’s first ever fast chargers to be CE certified by an independent party and approved for consumer use.

Introducing a new design with a roof of glass-glass solar panels and sustainable wood, they also bring a higher clearance, aiding driver visibility, and can accommodate larger electric vehicles.

The first 350kW station at service area ‘De Watering’ is located on the A8 highway near Amsterdam and will be followed by a further 10-20 stations, as well as some in Germany. To date, more than 25 locations have been signed and confirmed. The UK is expected to receive its first station at the end of this year, after Fastned won the TfL tender last year.

The new stations go live as a number of networks look to deploy 350kW chargers. This includes plans by the Ionity consortium of manufacturers, including BMW Group, Daimler, Ford Motor Company and the Volkswagen Group, to launch a network of 400 350kW stations along major European routes, with four of Europe’s largest forecourt operators having signed up to host the sites.

Previous: German courts rule cities may ban diesel cars
Next: Chargemaster predicts half a million EVs on UK roads by 2020