Four of Europe’s largest forecourt operators have signed up to host ultra-fast electric vehicle charging points under strategic partnerships with the manufacturer-backed pan-European Ionity network, securing half of the 400 sites planned by 2020. 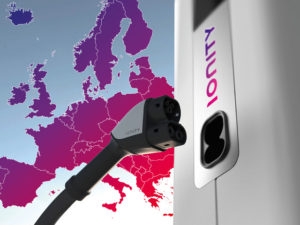 Shell, which is investing heavily in electric vehicles having recently acquired NewMotion and opened its first forecourt chargers in the UK, is the largest-scale strategic partner. It will host Ionity points in ten countries; Austria, Belgium, the Czech Republic, France, Hungary, the Netherlands, Poland, Slovakia, Slovenia and the UK, though it’s not clear yet how this will run alongside the Shell Recharge service launched last month.

Germany’s network will be rolled out in partnership with Autobahn Tank & Rast, which has 360 petrol stations and 400 service stations on the country’s motorways and recently partnered with Eon to offer EV charging. American convenience store giant, Circle K, will operate chargers across Denmark, Estonia, Ireland, Latvia, Lithuania, Norway and Sweden, while Austrian company OMV will host units in Austia, the Czech Republic, Hungary and Slovenia. The partnerships are claimed to have secured around 200 sites across Europe, laying foundations in 18 countries.

Marcus Groll, COO of Ionity, said: “The agreements with these prestigious partners constitute an important initial milestone in our relatively short company history. So in the future, we will be able to offer a large number of fast charging stations at attractive sites along major roads in Europe.”