Land Rover has updated the recently launched Defender with new engines, including its first-ever plug-in hybrid and a new diesel, as part of a range of MY 2021 updates. 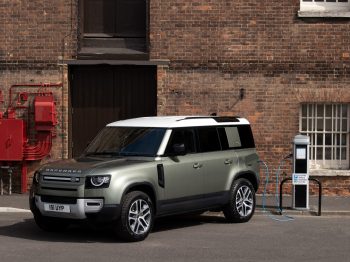 Hot on the heels of the arrival of the longer 110 version, the changes also see the shorter 90 model arrive, delayed by the pandemic, and the new Defender Hard Top commercial variant.

Among the key highlights for fleets is the new P400e model, marked out as the most powerful and fuel-efficient Defender. Available solely in the 110 model from launch, it uses the same powertrain seen in the Range Rover and Range Rover Sport, teaming up a 2.0-litre four-cylinder petrol engine and a 150hp electric motor to bring a combined 404hp. CO2 emissions are 74g/km with a combined economy of 85.3mpg (3.3l/100km). It also offers a zero-emission range of up to 27 miles (43km), including offroad.

The motor is powered by a 19.2kWh battery that can be charged using the standard Mode 3 charging cable, enabling charging to 80% in two hours. Using the optional Mode 2 cable provides a 0 to 80% in about seven hours while a 50kW rapid charger gives the same level in30 minutes.

It also holds true to the Defender’s offroad capabilities. The P400e offers high and low range off-road capabilities in full electric mode, P400e can tow up to 3,000kg, and is capable of carrying a roof load of 168kg (dynamic) or 300kg (static).

Standard features on the P400e include 20-inch alloy wheels, three-zone climate control and electronic air suspension. It’s available with the option of five or six seats and privacy glass.

Land Rover has also added a new six-cylinder Ingenium mild hybrid diesel to the range in three states of tune. RDE2-compliant, it replaces the four-cylinder diesel that was offered from launch in the D200 and D240 and is more economical as well as offering higher torque. Instead the range now gets Ingenium D200 and D250 models, providing 200 and 249hp respectively and returning 32.2mpg (8.8l/100km) and WLTP CO2 emissions from 230g/km. The new D200 and D250 y also deliver increased torque of (D200) and 570Nm (D250) and carry out the 0-62mph sprint in 10.2 seconds and 8.3 seconds respectively on the Defender 110.

The new Defender also becomes the first Land Rover with Intelligent All-Wheel drive system, which is fitted to all the new in-line six-cylinder diesels and continually varies axle torque based on driver inputs and data from the vehicle’s surroundings provided via sensors.

Other additions include a new X-Dynamic model, designed to bridge the gap between Defender and Defender X models. It’s available on both Defender 90 and 110, bringing beefed-up exterior design and bespoke interior details. The range also includes new colours and options.

The Defender 90 is now also on sale. It’s not available with the new plug-in hybrid but gets the same mild hybrid petrols as the 110 and the new diesels and is available with up to six seats when fitted with the jump seat in the front row.

As with the 110, all Defender 90 models use an eight-speed automatic gearbox with permanent all-wheel drive on petrol variants and Intelligent All-Wheel Drive on the new diesel versions. It offers Configurable Terrain Response and the same approach and departure angles as the 110.

Previous: Uber to electrify half its rides in European cities
Next: Transport Secretary to highlight fleet role in road to zero at BVRLA digital event