Vauxhall has taken the next step in plans to electrify its fleet with the reveal of the electric Corsa, due on sale later this year. 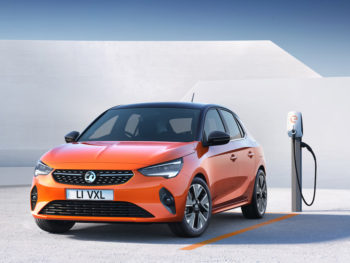 Unveiled just days after the brand took the wraps off the Grandland X PHEV, the sixth-generation Corsa gets a fully electric variant as Vauxhall plans for an electrified version of every model in its range by 2024, as first revealed in its PACE! post-takeover turnaround plans announced two years ago; this includes the new Mokka X and Vivaro models due in 2020.

The Corsa-e is built on the same platform as the Peugeot e-208 and also features a 50kWh battery – guaranteed for eight years – that brings 136hp of power, a 0-62mph time of 8.1 seconds and up to an official 205-mile WLTP range, compared to 211 miles for the Peugeot.  Drivers can choose between three drive modes: Normal, Eco and Sport; with the Eco mode extending range by up to 40% compared to Sport.

A 11kW on-board charger is included as standard and works with home and rapid chargers, with the latter enabling an 80% capacity battery charge in 30 minutes.

Drivers can choose between two levels of regenerative braking system, with the lower level said to bring deceleration similar to the engine-braking of a conventional car.

The new Corsa – which will be five-door only and will also be available in conventional petrol and diesel forms – will also get advanced driver assistance systems including Traffic Sign Recognition, Lane Keep Assist – marking a Corsa-first – Side Blind Spot Alert, Drowsiness Detection and Adaptive Cruise Control. The Corsa-e also offers two emergency braking systems and park assist technology.