The fourth-generation Honda Jazz has been revealed at the Tokyo Motor Show, bringing hybrid-only power as the brand advances its electrification plans. 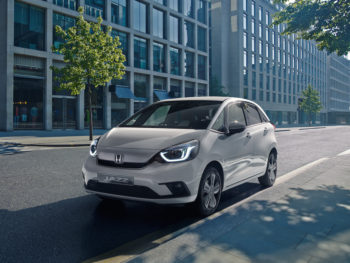 Due for launch next year, the new model will be the first to feature ‘e:Technology’ branding that will spread to all of Honda’s future electrified products, helping with its accelerated plans to have a fully electrified vehicle line-up by 2022, rather than 2025 as announced at the start of the year.

According to Honda, the new Jazz will introduce the efficiency benefits and performance of hybrid power to the mass market. Full engine details are yet to be revealed but the new Jazz – which will be branded as an ‘e:HEV’ – will feature hybrid technology already seen in the latest CR-V, where it’s offered in 2WD and 4WD.

No petrol or diesel engines will be offered in the new Jazz, as revealed to Fleet World in April and confirmed at last month’s Frankfurt Motor Show.

The new Jazz will offer the same “class-leading” space as its predecessor – thanks to the fuel tank being moved, which enables it to still offer the versatile rear ‘Magic Seats’ – but with claimed significantly improved comfort levels. It’ll also be available in a new ‘Crosstar’ variant, providing more of a crossover style design. Available with the same hybrid powertrain and interior features as the standard model, the new Crosstar features increased ride height, a unique front grille design, water-resistant upholstery and integrated roof rails.

Honda also says the new Jazz comes with the most comprehensive suite of advanced safety features and driver aids in its class. The Honda Sensing technology has been enhanced with the application of a new wider, higher-definition camera, replacing the previous camera and radar set-up, and bringing enhanced capabilities.

The Collision Mitigation Brake System (CMBS) is improved with night-time operation to detect pedestrians and cyclists when there is no street lighting, and now applies the brakes when oncoming vehicles cut across or turn into the path of the car. The new camera system also enables Adaptive Cruise Control (ACC) to follow traffic at low speeds in congestion and applies Lane Keep Assist on urban and rural roads – as well as multi-lane highways – for increased safety in more situations.

Sales of the next-generation Honda Jazz start in Europe in mid-2020.