InstaVolt is offering free installation of rapid chargers on fuel forecourts, enabling operators to make money from selling energy to plug-in car drivers without the outlay for the equipment to do so. 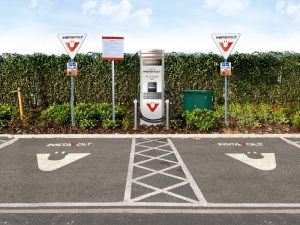 ChargePoint’s units can be upgraded for higher battery capacities.

The company said it hopes this will alleviate concerns stemming from the Automated and Electric Vehicles Bill, read in the House of Commons this week, which will mandate charging points at large fuel retailers and motorway service stations.

InstaVolt’s offer means retailers can have a ChargePoint rapid charger, one of 200 purchased by the company in a multi-million pound deal earlier this year, put on site. These are modular units, claimed to enable low-cost, straightforward upgrades as vehicles get larger batteries and need higher-outpot charging speeds.

Unusually, InstaVolt also offers the ability for drivers to access the points on a pay-as-you-go basis, using a contactless credit card instead of signing up to a membership scheme.

InstaVolt CEO, Tim Payne, said: “We want to reassure fuel retailers that the implications of the new Automated Vehicles Bill needn’t cost them a penny. We can handle everything from obtaining planning permission to upgrading the chargers as technology evolves. What’s more they can actually make a rental income from it.

“Retailers can expect to see increased dwell time, as drivers typically spend half an hour waiting for their vehicle to charge, spending money as they do. Drivers are actively seeking EV charge points too so forecourts can benefit from increased footfall.”

Electric vehicle charging at fuel forecourts is advancing quickly. Shell has installed its first rapid charging points in the UK, shortly after purchasing Dutch operator NewMotion, while Ecotricity announced this week that it would be extending its Electric Highway network to forecourts on London’s busiest routes.