Kia is adding a fully electric drivetrain to the Niro compact SUV, which will offer a range of 450km and 100kW charging when it comes to Europe next year. 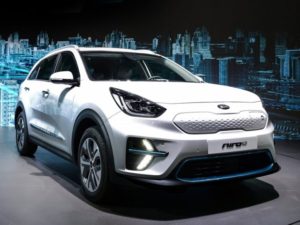 The Niro EV will feature high-capacity batteries and 100kW charging.

Confirmed during its public reveal at the Busan International Motor Show in South Korea, the Niro EV will become the Niro’s third electrified drivetrain, alongside hybrid and plug-in hybrid versions, when it launches in its home market in the second half of this year. In Europe, where 28,000 Niros were sold in 2017, the EV will arrive slightly later – likely in 2019.

Drivetrains appear to be shared with the Hyundai Kona EV; Kia will offer a choice of long-range 64kWh and 39.2kWh batteries, with ranges of 280 miles or 186 miles respectively, and Kia has confirmed a 201bhp electric motor. As the Niro EV can be charged at up to 100kW – twice the speed of today’s rapid chargers – it takes around 54 minutes to recover 80% of that range. It’s unclear whether, as in the Kona EV, the smaller battery will also get a lower-powered motor.

Inside, the dashboard has been redesigned around a rotary gear selector, and now features a wireless phone charger and a light near the windscreen showing charging status. Boot capacity is larger than the hybrid versions, and the Niro EV features a unique infotainment display with details about electric vehicle-specific data.

Expect European pricing to follow later this year, likely close to its regional debut which can be expected at the Paris Motor Show in October.