London will have 150 rapid chargers for electric vehicles on the streets of the capital by the end of the year – rising to around 700 by the end of 2022. The figures were given in evidence to a meeting of the London Assembly environment committee held on 17 January. 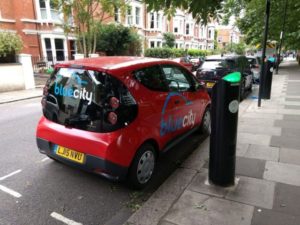 Transport for London (TfL) forecasts that there will be a reduction in car journeys in London of 3m a day by 2041, despite a growth of London’s population to 10m by the 2030s. However, concerns over air quality in the capital and a desire to be a zero-carbon city by 2050 mean that the Greater London Authority (GLA) is addressing the requirement for the switch to EVs – and the resulting need to provide charging facilities for those vehicles.

There are currently 12,000 EVs in London, which constitutes about 10% of the national total.

At the London Assembly environment committee meeting, representatives from TfL and the GLA indicated that a strategy to establish a charging infrastructure across the city – which already has 20% of the UK’s charging capacity – would be focused on enabling the replacement of the black cab fleet and promoting use of EVs by businesses.

London’s black cabs are currently responsible for 25% of NOx emissions in central London, so their replacement by the new petrol electric TX5 models built by Geely (using Volvo engine technology) is a priority for TfL and the GLA. However, at the same time, fleet operators will also be encouraged to switch to EVs, as their presence on the road will demonstrate to the capital’s population that they are a practical proposition.

The GLA and TfL are working with 25 London boroughs to identify suitable locations and install chargers across the city, with the likes of filling stations and car parks seen as useful strategic sites for rapid charging technology.

There are five approved companies providing rapid charging in the capital, but of the 150 rapid chargers in the city by the end of 2018, 90 will be dedicated for black cab drivers only. The number of rapid chargers will continue to increase over the coming years – thanks to a £18m investment in the capital – with targets of 300 by 2020 and 700 by 2022.

In addition to rapid chargers, the committee was also told of initiatives to establish a stronger network of on-street chargers for London residents without a garage or carport. Lamppost charging is one option being pursued by the GLA, but it has identified a lack of engagement from London boroughs as a challenge: raising it up the agenda of the boroughs is proving difficult, according to Lilli Matson, TfL’s director of transport strategy. Funding of £300,000 will be made available to the boroughs for charger installation.

Concerns over the charging of vehicles are a key barrier to uptake of EVs. Early EV adopters tend to have off-street parking, but 60% of London households don’t have off-street parking. On-street residential charging is therefore a need that will have to be addressed as London car users – including company car drivers – move out of vehicles powered by internal combustion engines and into EVs.

The meeting can be viewed online at https://www.london.gov.uk/london-assembly-environment-committee-2018-01-17.