Sixteen of the UK’s largest van fleet operators, including the Environment Agency, Network Rail and Tesco, have committed to adopting electric vans by 2020 under a new government-backed scheme intended to drive air quality improvements. 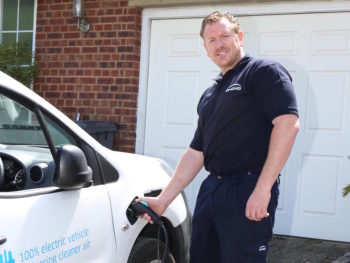 Launched by the Global Action Plan environment charity in partnership with utility firm Engie, the Clean Van Commitment initiative sees participating firms commit to switching a proportion of their fleet to electric vans to 2020, equating to some 2,400 vehicles.

This represents an investment of some £40m and more than doubles the number of electric vans purchased by UK fleets in the last year, according to Global Action Plan.

Scheme participants, who also include operators such as Anglian Water, Leeds City Council and Yorkshire Ambulance Service, have also made a further commitment for 18,000 electric vans to replace diesel vans by 2028.

The scheme is expected to bring about valuable air quality improvements by taking older diesel vans off the roads but will also provide EV manufacturers with clear visibility of forthcoming take-up, while helping to stimulate the second-hand market for EVs in the longer term.

In turn, participating fleets have called on the Government and van makers to do their bit by providing sufficient charging infrastructure and competitively priced electric vans. They’ve also called  for tax changes that support electric vans.

The scheme builds on government plans for up to 40% of new vans to be ultra low emission by 2030 under the Road to Zero Strategy, as well as the DfT’s bid to explore new opportunities for replacing vans with electric cargo bikes, vans and micro vehicles, announced in the Last Mile Call for Evidence published in July.

Bex Bolland, head of air quality, Global Action Plan, said: “Today marks a significant moment for the UK’s van sector. For the first time, we know just how quickly van fleet leaders aim to adopt electric vehicles. Their collective purchasing commitments show manufacturers that demand is thriving, and will help energy sector, local authority and central government planning. These 16 fleets will pave the way for the national fleet of four million vans to become zero emission, significantly improving the air we all breathe.”