Opel has said that sales of its new Ampera-e will kick off in Norway – the most mature electric vehicle market in Europe – first with Germany, Netherlands, France and Switzerland next in line. 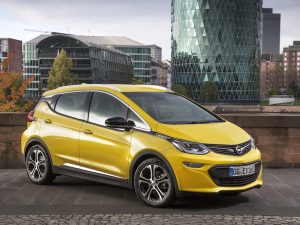 Sales of the new Opel Ampera-e will kick off in Norway.

The carmaker added that the staggered launch is due to the limited volumes that will be available in the first months as production ramps up. As a result, the launch plan focuses initially on the markets that have an existing EV infrastructure in place and/or have shown the greatest ambition to populate their streets with electrically-powered vehicles.

Most other European countries will follow in late 2017 or during 2018 as production volume grows but Peter Christian Küspert, Opel Group vice president sales & aftersales, added: “We are flexible here and will be able to add countries or change the order at short notice if somebody becomes so attractive because of changed policies for example. Our goal is to have enough capacity by 2018 so that we can offer decent volumes in most European countries.”

As previously announced, the Ampera-e won’t be sold in the UK.

The new Opel Ampera-e will bring an NEDC electric range of over 500km (311 miles) while the combined WLTP range (Worldwide Harmonized Light-Duty Vehicles Test Procedure) is estimated at more than 380km (236 miles).