By Alex Grant / 6 years ago / Features / No Comments 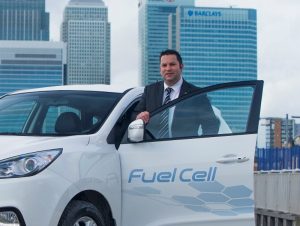 What does your role entail?

Initially it’s to deal with fuel cells and all the activities which come under that. So the deployment, to the nuts and bolts of getting vehicles registered, delivered and handed over to customers, and speaking to customers. It’s also representing Hyundai on various activities such as UKH2 Mobility, HyFive and London Hydrogen Network Expansion project. Going forward it’s also going to encompass our electric and plug-in hybrid vehicles, which will come to market in the next 18 months but it’s early days on that.

Launching hydrogen fuel cells in Europe before hybrid or electric models is unusual, isn’t it?

We do have that technology overseas, in America and Asia, but yes it’s an interesting one for a manufacturer to go the more in depth technical way rather than the established ones. But that’s the Hyundai way – it comes back to the slogan ‘New Thinking New Possibilities’, and how you get the technology to market in a way that it doesn’t affect anything for customers on performance or range. Fuel cell matches up with existing technology already, so why not get that vehicle to market?

How large does Hyundai see the UK market for FCEVs?

To some extent it’s out of our control. There’s an initial planned production run of 1,000 units globally, that’s what we planned, obviously we’d be in a fantastic position to go back to the factory and ask them to increase their production – and we can do that – but I think there’s a couple of things about this particular generation which limits us in the UK. It’s only available in left hand drive, which obviously represents a barrier for some customers. The other thing that’s limiting us is infrastructure, and that’s what we’re really pushing now.

As opposed to a conventional vehicle, there are so many influencing factors that are outside our control. It’s really difficult to put a target on how many vehicles we will sell. Obviously the government announcement of £11m of funding and £2m to go towards vehicles next year and I would like to assume that a large number of those will come towards Hyundai. Having said that, I don’t know because we’re awaiting the details of how the funding will work with the government.

But do you think the UK could be one of the biggest global markets?

The UK has the potential to be the largest market in Europe, if not the world, but you’re always going to come up against the States. The States have got a well-developed infrastructure but only really in California – elsewhere it’s the same as anywhere else in the globe. The UK has the potential to be a significant player. Hyundai in the UK wants to be the number one fuel cell market globally, that’s my ambition anyway.

How have you marketed the vehicle to fleets?

We’ve spoken to a number of different fleets. The main problem we’ve got is in the early days it’s not really a viable option, mainly because of the infrastructure but also because it doesn’t represent any financial saving over current low emission vehicles.

What we are trying to identify is not the traditional fleet manager, but the CSR managers, or PR managers within the organisation who see the benefits of the vehicle beyond its price per month. They see how it can promote their own green agendas, or carbon and NOx reduction programmes. So yes we have spoken to some fleets, and it’s not really a fleet option just yet. But it could become a fleet option within a short time.

When do you foresee cost parity with diesel cars?

I think, in a very careful way, I would say within the next five to ten years. But it comes down to production levels; the sooner we can get increasing numbers of vehicles out to customers, obviously we can then drive the cost of production down so cost parity arrives sooner. It puts us in a difficult position because we’re not able to flood the market with vehicles at an attractive price to the customer to get the volumes, it doesn’t work like that.

How is Hyundai looking to solve the lack of infrastructure?

We have no desire to become hydrogen retailers or hydrogen suppliers, but if that’s the single biggest limiting factor we have in terms of getting this technology off the ground then it’s one of the areas we’re considering. We’re considering putting stations within some of our dealer network to link these hubs together and give the driver a realistic availability of a network of stations up and down the country. But that’s at very early stages for us.

How important is collaboration with stakeholders?

A lot has been learned from the initial EV side of things. There’s an agreed global standard on the refuelling so you can take a car from the UK and fill it up in another country on a different manufacturer type. Everything is uniform. From an early market point of view there’s also a lot of collaboration between OEMs, and again to give this confidence to the gas suppliers and the retailers that these cars are coming.

We’ve certainly done a lot of work with Toyota Europe over the last few months. I know it sounds strange that the two initial competitors are talking to each another, but in a market in of the size this is at the moment you have to work together for your own advantage. There’s no point in going head-to-head at this moment because the market is too small.