Europcar has teamed up with Go Ultra Low to run a one-day roadshow in Manchester showcasing the latest electric vehicle developments. 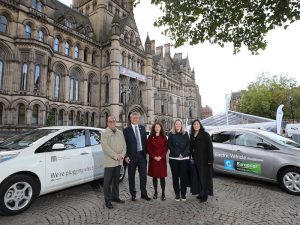 The roadshow is being run by Europcar and Go Ultra Low with the help of Manchester City Council and Transport for Greater Manchester.

Open until 7pm tonight (12 October) in Albert Square, Manchester city centre, the event – supported by Manchester City Council and Transport for Greater Manchester (TfGM) – is aimed at local residents and businesses as well as visitors and provides the chance to test-drive the newest electric cars on the market.

Visitors can also put their driving skills to the test in a Formula E electric street racing series simulator, with the opportunity for 20 motorists to win a Renault ZOE for the weekend.

The roadshow comes as Go Ultra Low announces continued record-breaking uptake for plug-in electric cars in the UK. New vehicle data reveals 12,932 electric cars were registered from July to September, a year-on-year rise of 36%, thanks to a best-ever September month for plug-in registrations as 7,794 EVs were new on UK roads – up 27% on September 2016.For more of the latest industry news, click here.