Scottish Water has deployed two Renault electric vans, marking the first EVs on its fleet, as it explores how it can roll out further EVs. 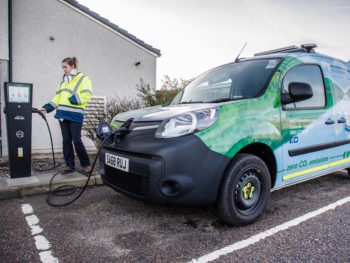 The new vans include a refrigerated Renault Kangoo Z.E. 33 that’s being used to assist with the water sampling undertaken by its Scientific Services team across the Highlands. It brings a ‘real-world’ range of up to 124 summer miles (75-99 miles in winter) that will ably complete the routes across the Highlands that are regularly completed by Scottish Water’s water samplers.

The liveried vehicle has been converted by Bott and features roof-mounted 150-watt solar panels to power its onboard refrigeration equipment. The panels charge a 200 amp lithium battery, which in turn powers the 140-litre temperature-controlled refrigerator that is required to keep water samples in optimum condition during transportation.

Ross Shepherd, fleet manager, Scottish Water, said: “We have already lowered our carbon footprint by introducing drivers to fuel efficient techniques and awareness coaching, which has seen 10-15 per cent saving in fuel use, but the next big step is to evolve the electrification of our fleet and we believe the Renault Kangoo Z.E. 33 to be the perfect vehicle for an electric vehicle trial. It’s a very big milestone for us.”

“First impressions are already good and our sampling team are enjoying how easy it is to drive, while both vehicles are also performing well in terms of range and being up to the task. Being able to do our part to protect our local environment is upmost to us, but the cost savings we will make on fuel and maintenance will also enable us to invest in other areas that have a direct impact on the customer experience.”