A Shell forecourt in Oxfordshire has become one of the first in the country to deploy new rapid chargers from InstaVolt. 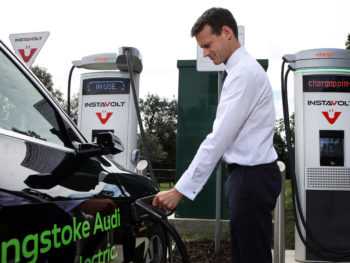 The new rapid chargers are capable of charging at 125kW

The new stations are capable of charging at 125kW – halving the time it would take drivers of compatible vehicles, such as the Audi e-tron, to charge compared to rapid 50kW chargers.

The InstaVolt chargers have been installed at Frilford Service Station, near Abingdon, following its recent renovation and are expected to be embraced by electric car drivers travelling to and from the city or using the A34.

As with the whole InstaVolt’s network, drivers can pay by simply tapping their contactless credit or debit card, or even use their smart watch to pay if it is set up for contactless payments.

The chargers have been deployed ahead of Oxford’s plans to become the world’s First Zero-Emissions Zone.

Adrian Keen, chief executive officer at InstaVolt, said: “We’re particularly excited to be adding to the charging infrastructure in Oxfordshire, which is well-known for being forward-thinking when it comes to sustainability and I applaud the great work that has been done to-date to provide charging to residents and visitors. It’s fitting that it’s one of the first places in the UK to benefit from our brand-new charging technology, which offers even faster rates of charging to drivers who need to recharge quickly and continue their day such as commuters, and drivers of electric taxis or delivery vehicles.”