SSE is introducing the fully electric Renault Zoe Van to its fleet as part of the company’s commitment to have ‘net zero’ carbon emissions by 2050 at the latest. 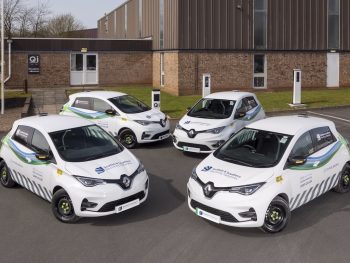 The Zoe Vans will enable SSE to continue its drive to have 3,500 of its 4,000 commercial vehicles fully electrified by 2030

The Zoe Vans will enable SSE to continue its drive to have 3,500 of its 4,000 commercial vehicles fully electrified by 2030 and will also help the company to lower its environmental impact in terms of both emissions and noise.

The business has already introduced four Zoe Vans into its commercial vehicle fleet, with a further eight on the way. Over a five-year period, each Zoe Van will provide a saving of 23.5 tonnes of CO2, under SSE estimates.

The Zoe Vans will replace previous ICE vehicles and were chosen for their range of up to 245 miles – while SSE had previously looked at commercial-focused EVs, the range had not been sufficient. Driver comfort and low whole-life costs were also factors in the decision.

The Zoe Vans will be used by SSE’s supervisors and team leaders to visit the company’s operational sites and developments throughout Scotland. The Zoe Van’s range will enable SSE personnel to visit more remote areas, particularly in the north west of the country, where the charging infrastructure can be limited.

The coverage and support of the Renault dealer network, plus the standard eight-year battery warranty, were further attractions for SSE, while its flexible charging means SSE’s personnel will be able to charge their vehicles at home without issue.

The vans have been converted to meet SSE’s specification by Renault-accredited converter Qi, with additions including a hygiene station and fire extinguisher. They also feature a unique wrap by Mediafleet, which showcases their pure electric power and even glows in the dark.

Neil Chamberlain, national EV manager, SSE, said the addition of the Zoe Vans will enable the company to further lower its environmental impact without impacting operational costs or effectiveness.

“The range of electric LCVs has always been a bit of an issue in the past for the roles that these vehicles are used for, so that of the Zoe Van now gives us the option to make the transition and look at other areas where a van is traditionally used but there isn’t a need for a high payload. The comfort is a big benefit to our operatives and, for those that are negotiating the narrower, more demanding roads of the Highlands, the compact dimensions are another welcome bonus,” he outlined.