Swedish road can charge electric vehicles as they drive

By Alex Grant / 3 years ago / International News, Tech / No Comments

The world’s first public road capable of recharging electric vehicles as they drive is now live in Sweden, beginning a two-year trial with large commercials. 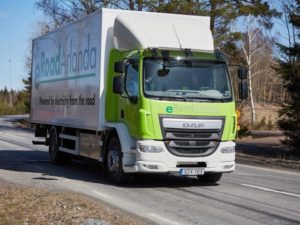 Installed along 2km (1.2 miles) of road near Stockholm, the eRoadArlanda consortium’s technology transfers energy to the vehicle via a movable arm, which automatically extends when it detects the electric rail underneath, and retracts when it moves back to normal roads. This is based on conductive technology, rather than the inductive (contactless) dynamic charging which is being considered in the UK.

The two-year trial will use a converted 18-tonne PostNord delivery truck, but the technology can also be used to charge passenger cars and lighter commercial vehicles. It energises small sections of the road at any given time, and only while the vehicle is moving, and the project will also look at whether this could provide assistance for steep inclines, saving fuel.

It’s claimed that electrifying Sweden’s 20,000km (12,000 miles) of roads with the technology would cost SEK 80bn (£6.6bn) but save around SEK 32bn (£2.7bn) in fuel costs per year, meaning it would take less than three years to recoup the investment.

Hans Säll, chairman of the eRoadArlanda consortium and Business Development Director at project partner, NCC, said: “One of the most important issues of our time is the question of how to make fossil-free road transportation a reality. We now have a solution that will make this possible, which is amazing. Sweden is at the cutting edge of this technology, which we now hope to introduce in other areas of the country and the world.”