A Salford City Council scheme to replace grey fleet usage with EV pool cars has generated savings of £400,000 in the first 18 months. 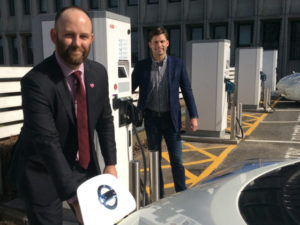 Salford City Council says it has saved £400,000 in the first 18 months after switching to EV pool cars

Intended to improve local air quality as well as cut costs from mileage reimbursement and enhance health and safety, the scheme is being run through the Co-Wheels car club and offers staff access to a fleet of 12 Nissan Leafs. The vehicles have also been available to hire by members of the public in the evenings, with plans to expand the scheme through the provision of EV vehicles across Manchester available 24 hours a day.

The savings have been made by switching to EV pool cars from grey fleet and also from staff owned vehicles through not having to pay HMRC mileage costs at £0.45 per mile, the Council added.

The scheme has also been backed up by the installation of four rapid charge points by Franklin Energy at Salford City Council’s headquarters.

“By operating an EV pool fleet, council staff members will become familiar with the concept as it increasingly considered a typical form of transport. Salford has realised major savings, already highlighting what can be achieved when applying an innovative and forward-thinking approach to major areas such as transport.”