U.S. says electric vehicles must make a noise by 2019

Hybrid and electric vehicles will be required to emit an audible warning at low speeds, following a new federal safety standard set in the United States. 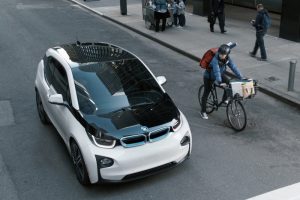 NHTSA has mandated low-speed warnings for vehicles driving on electricity

Announced by the National Highway Transport Safety Administration (NHTSA), the rules apply to electrically-driven four-wheeled vehicles weighing 10,000lbs (4.5 tonnes) or less, all of which will now have to make a noise when travelling at 19mph or less to warn pedestrians they are approaching.

Originally proposed in 2011, NHTSA said this will help prevent 2,400 pedestrian injuries once all vehicles are equipped. Manufacturers have been given a 1st September 2019 deadline to meet the new standard, though half of new hybrid and electric vehicles must comply one year beforehand.

“We all depend on our senses to alert us to possible danger,” said U.S. Transportation Secretary Anthony Foxx. “With more, quieter hybrid and electrical cars on the road, the ability for all pedestrians to hear as well as see the cars becomes an important factor of reducing the risk of possible crashes and improving safety.”

“We commend NHTSA on bringing this process to completion,” said Eric Bridges, executive director of the American council of the Blind. “This new safety standard moving forward will not just make our streets safer for blind and visually impaired Americans, but also serve as an additional safety cue for all pedestrians who share the streets with hybrid or electric vehicles.”