Volkswagen has revealed details of pricing and specs for its ID.3 electric hatch range, which starts from under £30k (incl. PiCG). 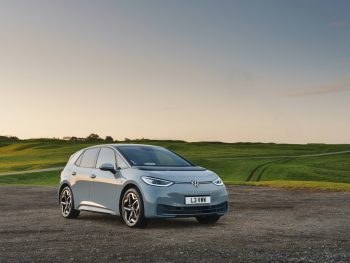 The arrival of the ID.3 series models means the range now starts at under £30,000

A total of seven new ID.3 variants will open for orders on 22 October, following the arrival of the limited-production ID.3 1st Edition, and start first deliveries before the end of the month.

The expanded line-up includes six ‘Pro Performance’ models using the same 58kWh battery and 204hp motor set-up as the 1st Edition. These are pre-configured in Life, Business, Family, Style, Tech and Max trims and bring an official combined range from 258 to 263 miles.

The seventh model introduces a new ‘Tour’ specification and comes exclusively in ‘Pro S’ set-up, which retains the 204hp motor but introduces the range’s largest 77kWh battery to provide an increased combined range of 336 miles.

The range will also gain extra models next year, positioned as the entry-levels to the range and featuring a smaller 45kWh battery and lower power outputs.

Instead of equipping models with extra features as trim levels rise, Volkswagen has organised equipment into five packages – Design, Infotainment, Comfort, Assistance and Sport – each of which comes in a ‘Plus’ enhanced version. Different models get different packs, meeting varying customer needs while also enabling swifter production at VW’s factory in Zwickau, Germany.

The ID.3 Business meanwhile, which is priced at £33,720 (incl. PiCG), gets two extra ‘packages’: Design and Assistance.

At top of the range, the ID.3 Tour, based on the Pro S with the higher-powered 77kWh battery, costs £39,290 (incl. PiCG) and carries the Design package and three ‘Plus’ packages: Infotainment, Comfort and Assistance.

While the specification is fixed on each ID.3 model, customers can choose from six exterior colours, three interior colour combinations, a number of wheel options and a list of extras including a heat pump, as well as various accessories such as a rear-mounted bike carrier.

Customers can also customise the exterior with the Exterior Style packages.

Deliveries start before the end of the month and, as with the ID.3 1st Edition, the series ID.3 cars will be delivered to customers net carbon-neutral.

Previous: BMW and Mini batteries to get second life as mobile power units
Next: Drover to advance further into electric vehicle subscriptions under new funding