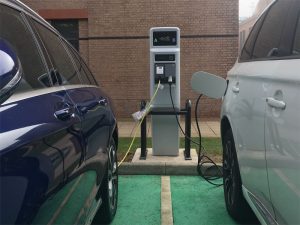 The National Grid is looking at the viability of installing charge points at more offices.

Latest data from eVolt and National Grid shows a 334% uplift in the use of six charge points at National Grid House, the Warwick-based operational HQ of National Grid, following their installation as a viability project in April 2016.

Darren Watson, environmental operations advisor for National Grid’s Sustainability and Climate Change team, has also reported a near doubling of Plug-in Hybrid EVs (PHEVs) in the company car fleet since the chargers were installed – with the number of company car PHEVs up from 177 to 375 and an increase in the number of fully electric vehicles.

“The chargers’ take up has been rapid and exponential,” said Watson, “and we are forecasting further rises as the business continues to support the adoption of EVs, and our employees continue to select them as a credible alternative to traditional petrol or diesel engines.”

As a result, National Grid is now looking at the viability of installing charge points at other, office-based sites, including finding solutions for more remote sites with fewer employees.

Justin Meyer, general manager of eVolt UK, said National Grid’s experiences are a prime example of why companies, including rural businesses, should consider an EV infrastructure: “The figures show what we consistently see after a business installs charge points; the considerable increase in their use alongside the increasing take up of EVs being used by employees.

“One of the key factors holding back EV sales is drivers’ worry that they will run out of battery power – what the industry calls range anxiety,” he continued. “But with charge points installed at working locations, drivers have convenient charging that fits with their normal driving routine.”