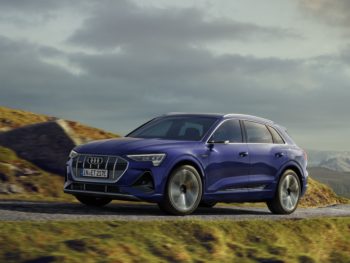 The new entry-level e-tron – announced last year – joins the line-up alongside the continuing e-tron 55 quattro and features a smaller battery pack that brings a WLTP range of up to 190 miles, compared to the 241 miles offered by its bigger brother.

Director of Audi UK Andrew Doyle said: “This new version of the e-tron opens up the possibility of driving ultra-economically and with zero local emissions to a wider customer base. Our research has shown that on a daily basis many prospective buyers will cover significantly less than the 190-mile maximum achievable in the e-tron 50 on a full charge, so for them this more accessible yet no less accomplished variant makes perfect sense.”

Maximum charging rate has also been cut to 120kW, from 150kW, but an 80% capacity charge can be achieved in around 30 minutes at fast-charge stations while it can also be charged at home using AC charging – a 7kW home wall box charger is currently available at no extra cost to all e-tron and e-tron Sportback customers and gives a full charge in around 10.5 hours.

The latest e-tron uses a twin motor ‘e-quattro’ all-wheel drive set-up that sees just the rear electric motor active in most driving situations, with the front electric motor activated predictively when needed. 0-62mph time is seven seconds and it has a top speed of 118mph.

E-tron drivers can also sign up for the new Charging Service, which offers subscribers a choice of two fixed-price charging tariffs via hundreds of charging points operated by 18 providers in the UK and while roaming at no extra cost overseas. The Transit tariff, which would normally cost £16.95 per month and grants subscribers free access to the high-powered Ionity network (but doesn’t include actual charge fees), is offered free of charge to new e-tron customers for the first 12 months.