New charging points have been installed at Sandon and Chelmer Valley Park and Ride sites by Electric Blue in partnership with Essex County Council. 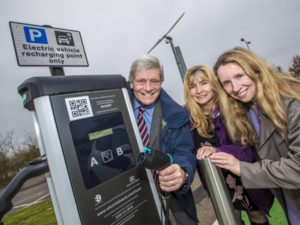 Thanks to the new charge points at Sandon and Chelmer Valley Park and Ride, four cars can charge simultaneously at each location

Thanks to the new charge points at Sandon and Chelmer Valley Park and Ride, four cars can charge simultaneously at each location

The 100% renewable energy-powered charge points, said to encourage uptake of electric vehicles and cut emissions within the county, were installed free of charge by Electric Blue and are free to charge at until Sunday 13 March.

Thereafter, motorists will be able to pay 25 pence per kWh using an app or RFID card, with no subscription or connection fee. Electric Blue says this will equate to around £7.50 for a 30kWh electric vehicle.

Cllr Ian Grundy, the cabinet minister for Highways said: “This project comes at zero cost to taxpayers and replaces the two chargers installed in 2011 and so doubles the capacity at each site.”

Each point can charge two cars at a time meaning that four cars can be charged simultaneously at each site and should take about four hours to fully replenish the battery at a 7kW rate.

Electric Blue CEO Alex Calnan said: “We are pleased to be able to support Essex County Council in improving their EV charger at the Park and Ride facilities and look forward to playing a significant role in helping their residents improve air quality by converting to zero emission electric vehicles.”

Previous: Have your say on AFRs for plug-in cars
Next: Ford hints at Kuga PHEV as diesel sales drop