Fiat Professional has unveiled its e-Ducato electric van, which is already open for orders. 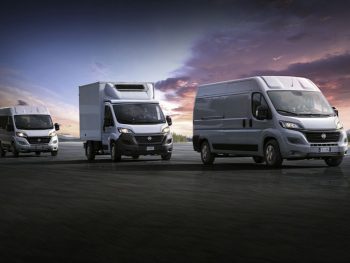 It’s priced from £47,675 excluding VAT (incl. the Plug-in Van Grant) and will start first UK deliveries in May. The first variants to reach the UK will be van and chassis cab models. Three van body lengths (L2, L3 and L4) will be offered with three roof heights (H1, H2 and H3). No L1 models will be produced, meaning e-Ducato will offer body volumes between 10m3 and 17m3.

Similarly, chassis cabs will be offered in three overall lengths with four wheelbase options. The e-Ducato will offer payloads up to 1,885kg for van models.

The Sevel plant in Italy, which also produces the Citroën Relay and Peugeot Boxer, will build the e-Ducato except for the battery and powertrain components. Final assembly of these components will take place at the Mirafiori facility in Turin. There will be no production of electric Boxer and Relay models alongside e-Ducato. Production of e-Relay and e-Boxer will continue to use conversions by BD Auto in Turkey, which also produced earlier electric versions of electric Ducato.

The e-Ducato will be produced with a choice of 47kWh and 79kWh batteries. This will provide a range of between 88 and 175 miles measured on the WLTP combined cycle. Power will come from a 122hp electric motor producing 280Nm of torque. To optimise the range, a 62mph speed limiter will be fitted.

Charging options include AC charging from a wallbox or domestic socket and DC rapid charging from the public charging network. Fiat Professional claims a charging time of 2 hours 25 minutes for the 47kWh variant and four hours for the 79kWh variant when charged at a 22kW charging point, although this will not be available until Q1 next year. It will take seven hours 55mins to charge from a 7kW wallbox for 47kWh variants. Fiat has not published a charge time for the 79kWh battery from a 7kW charge point.

Like most EVs, e-Ducato is equipped with regenerative braking to charge the battery when on the overrun and braking. Three driving modes are standard. These are Normal, to provide a balance between performance and economy, Eco to limit acceleration and de-activate the air conditioning to conserve range, while the Power mode provides full performance. The e-Ducato also offers an emergency ‘Turtle’ mode if the battery is nearly exhausted. The driver is alerted and then the van activates a mode with much reduced performance to maximise the remaining range.